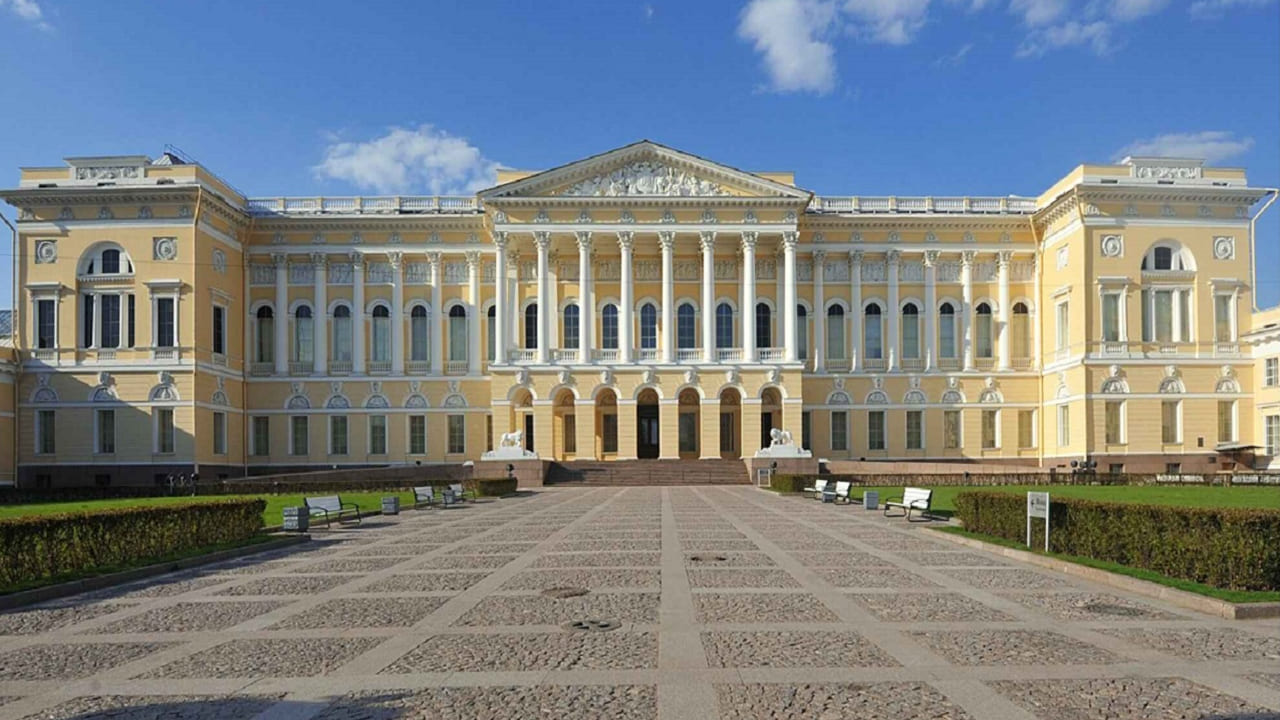 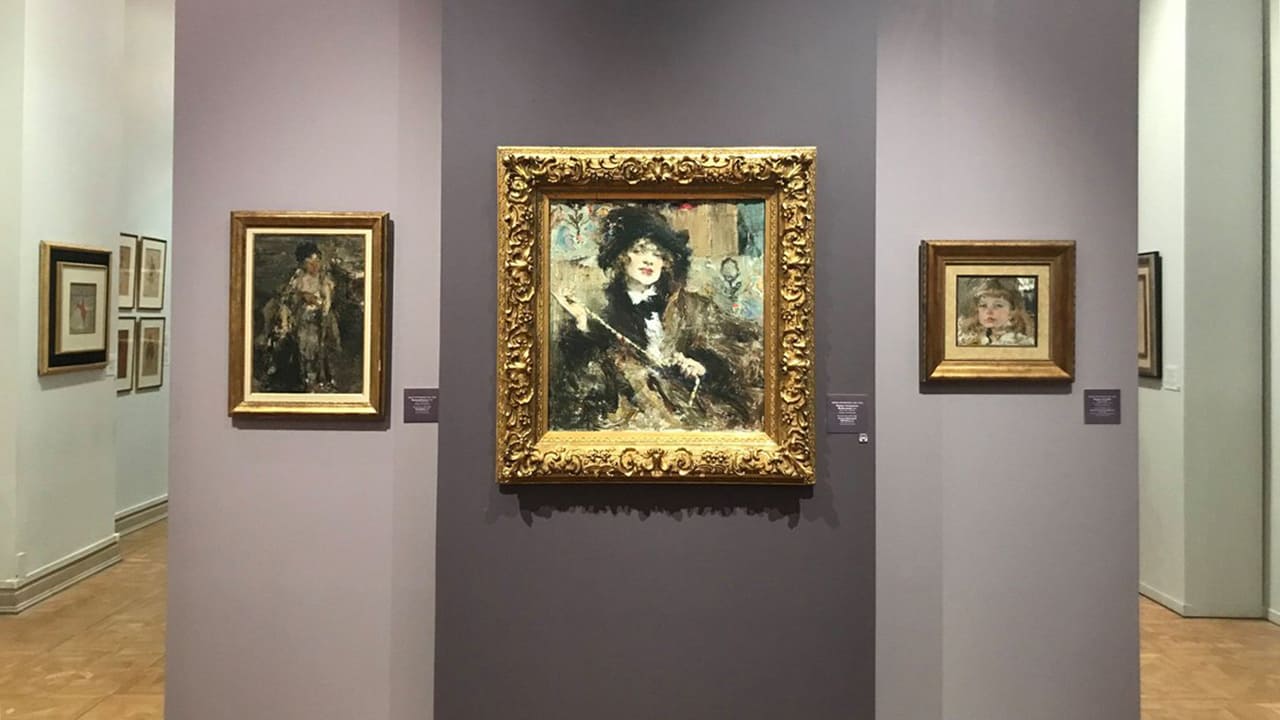 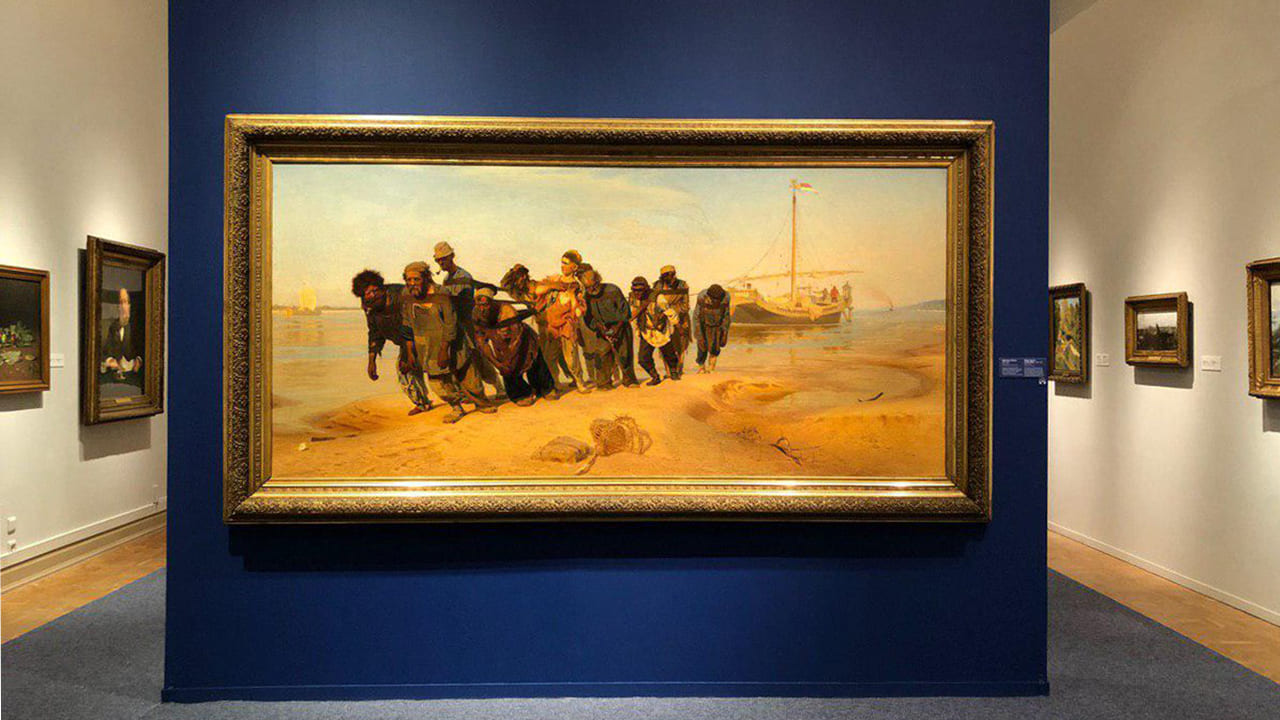 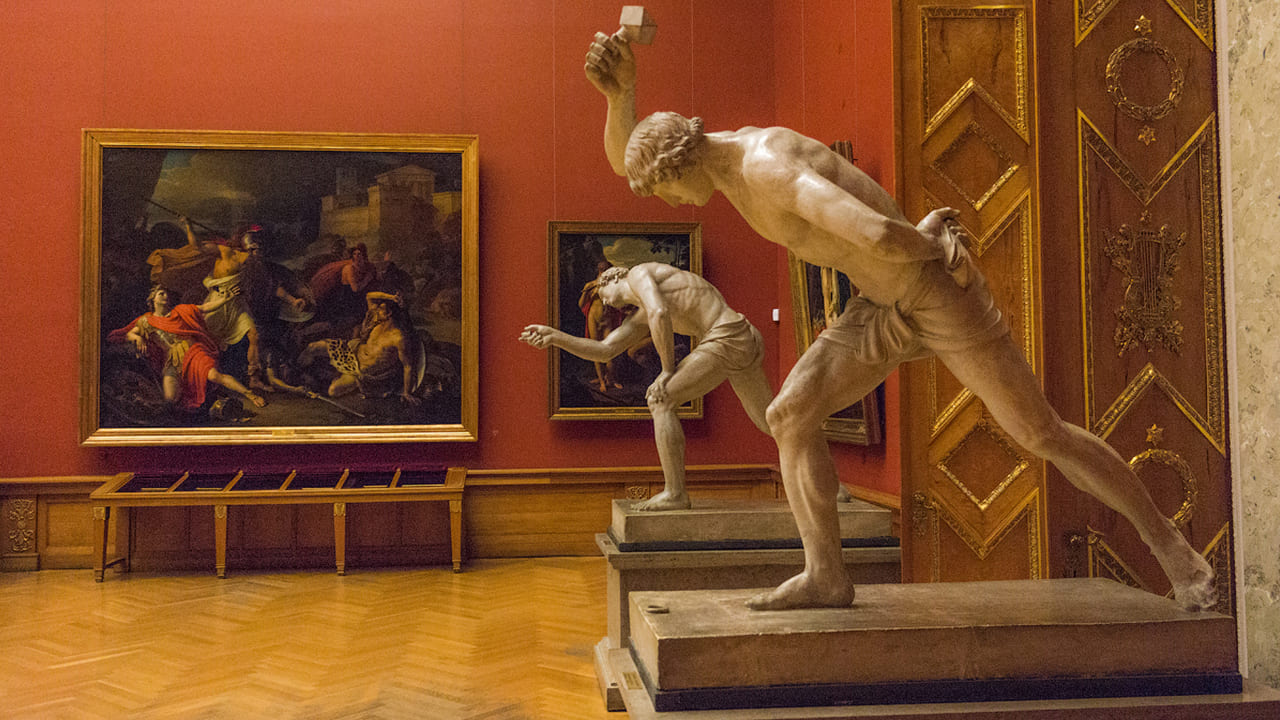 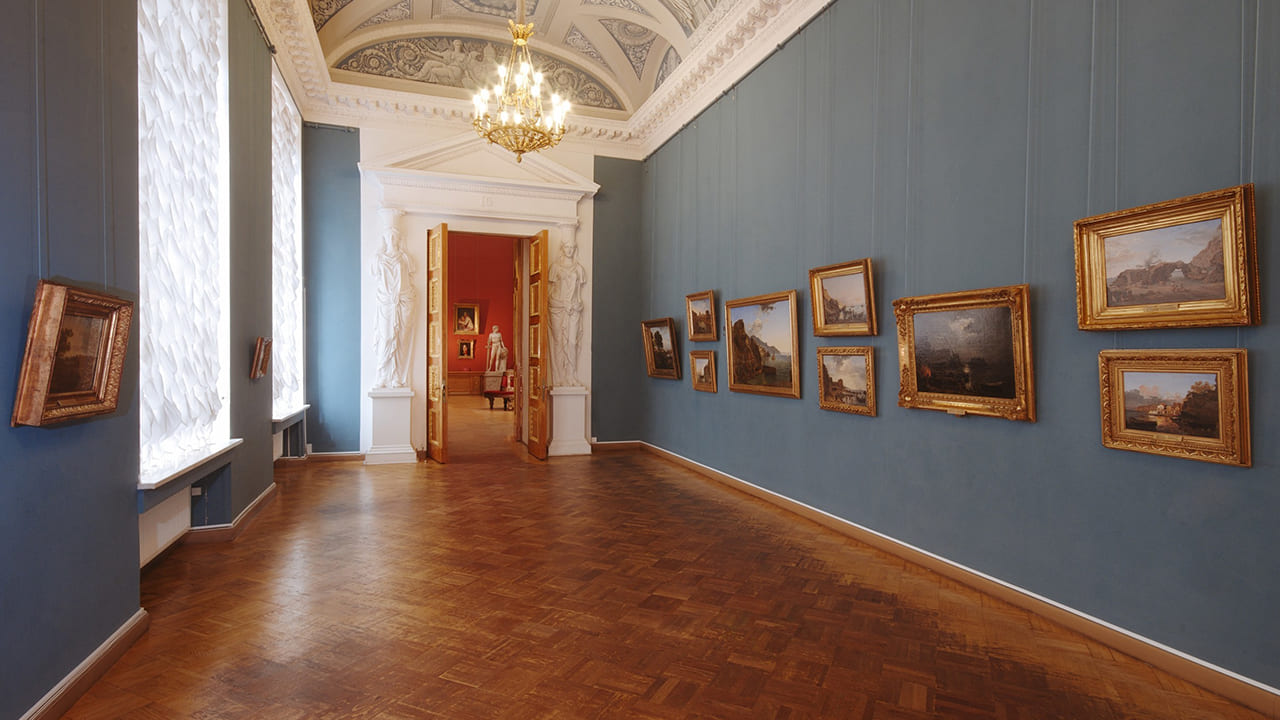 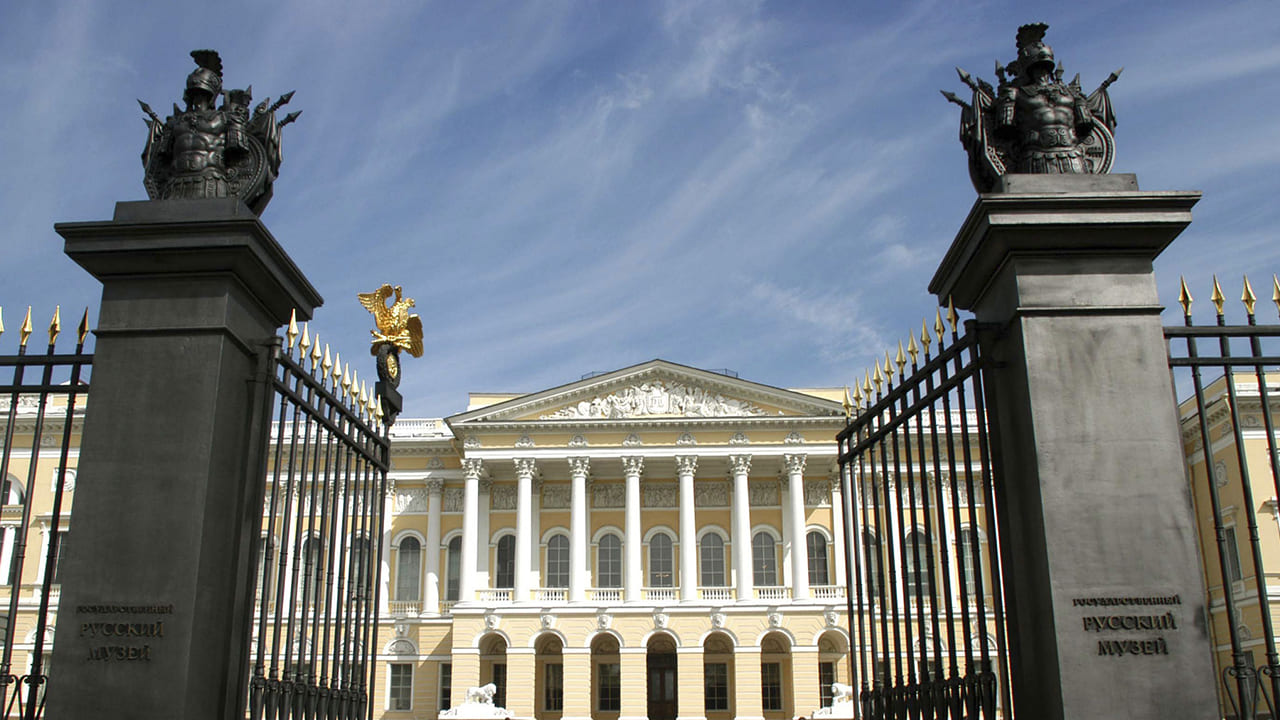 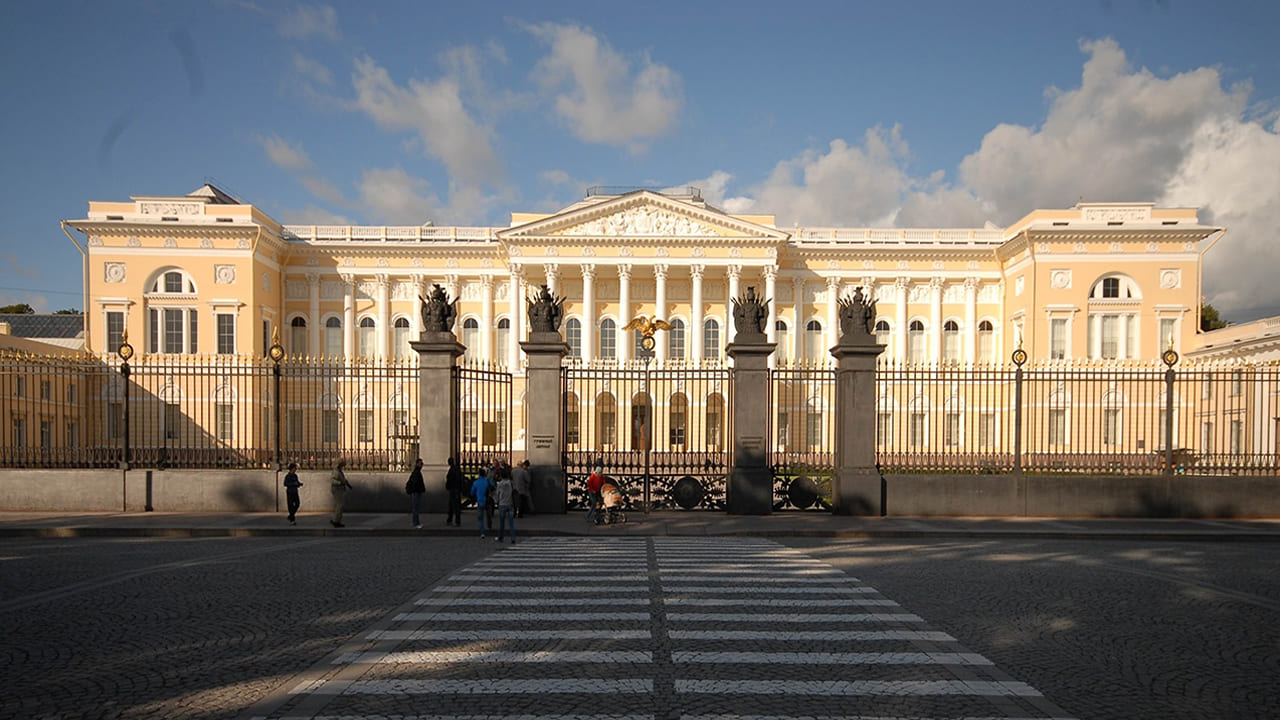 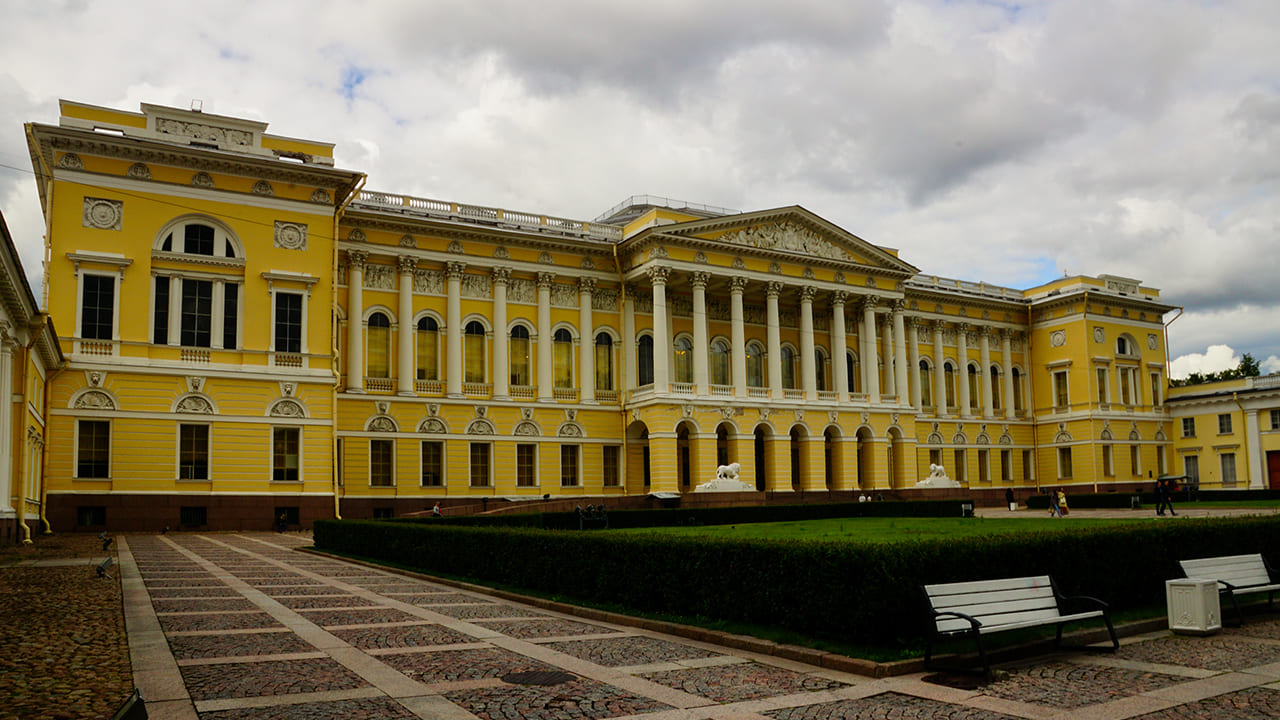 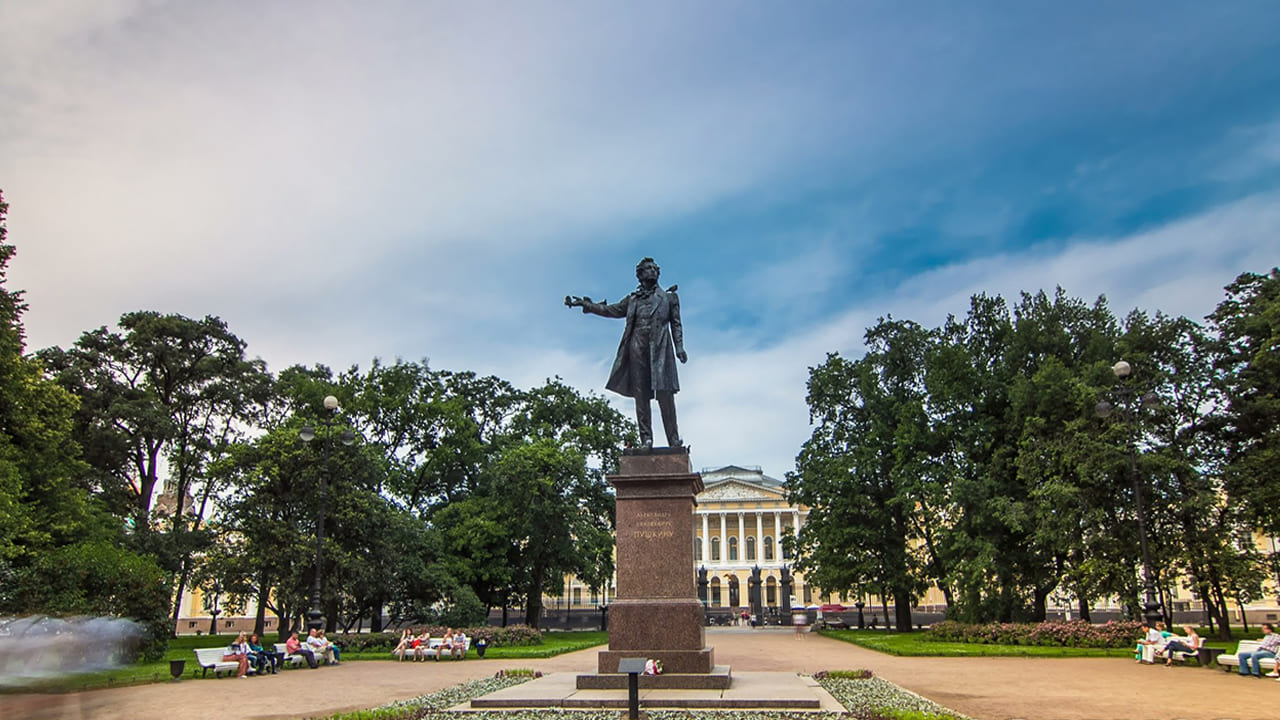 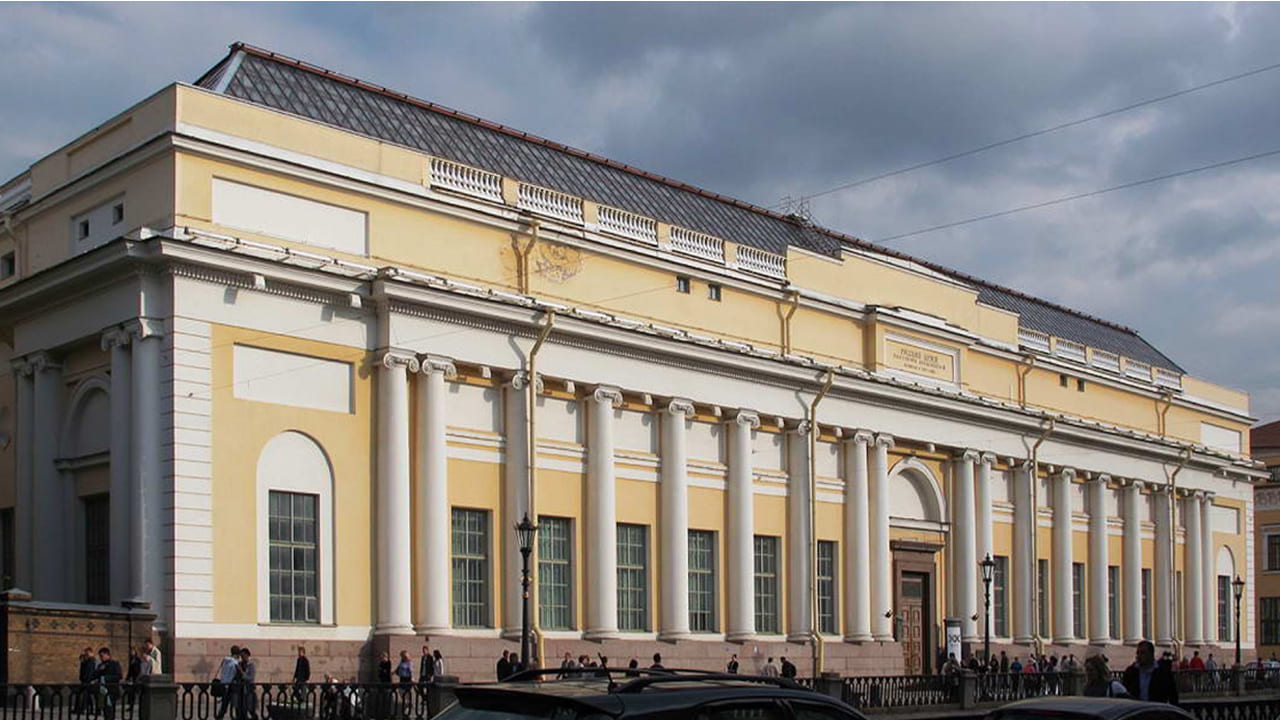 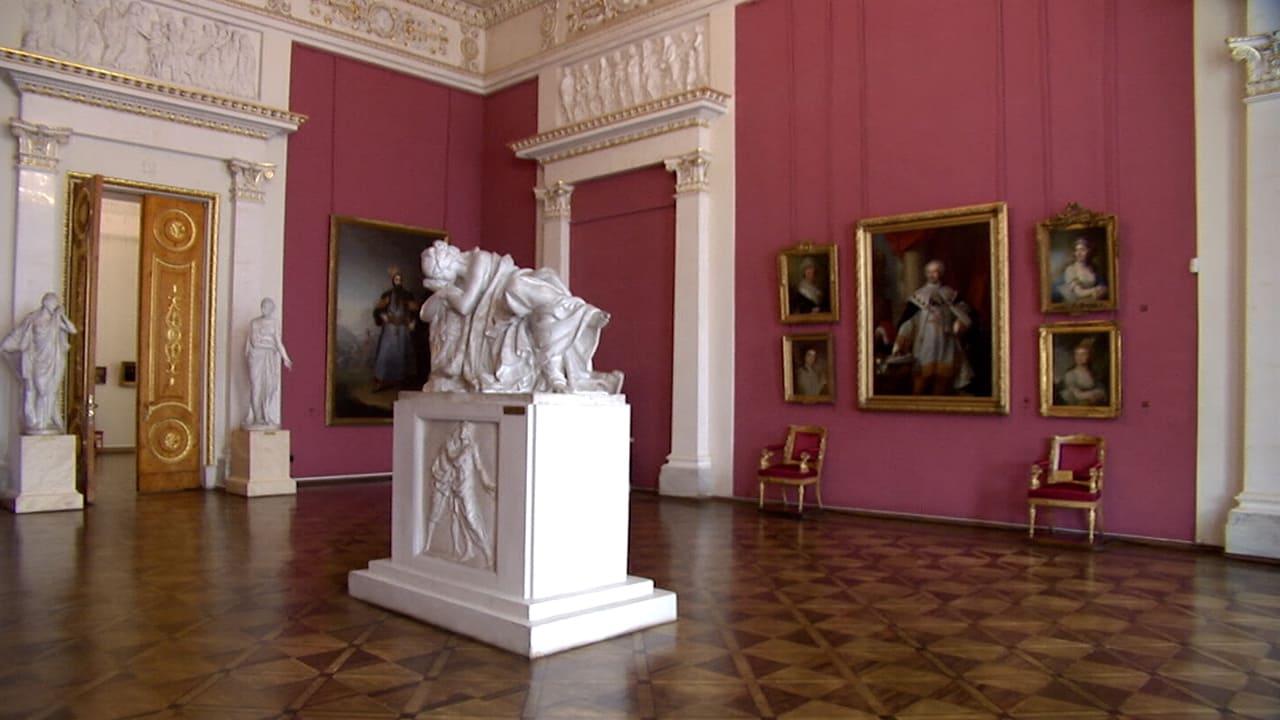 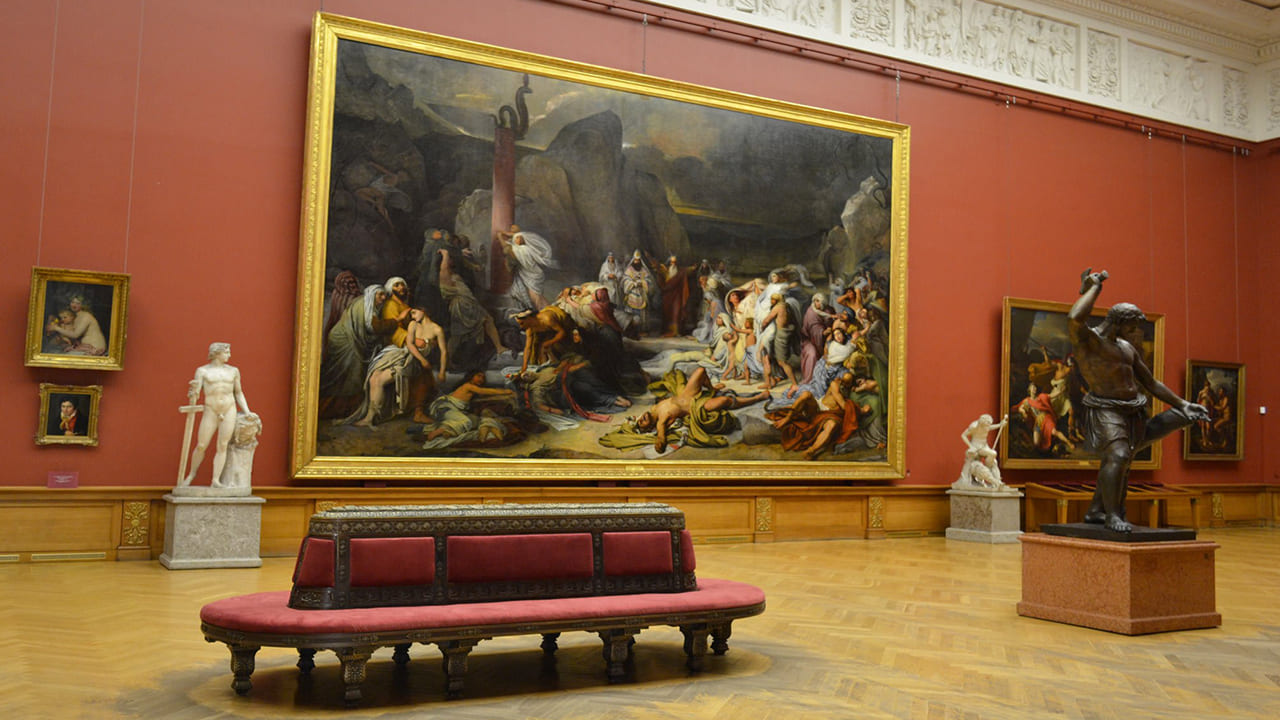 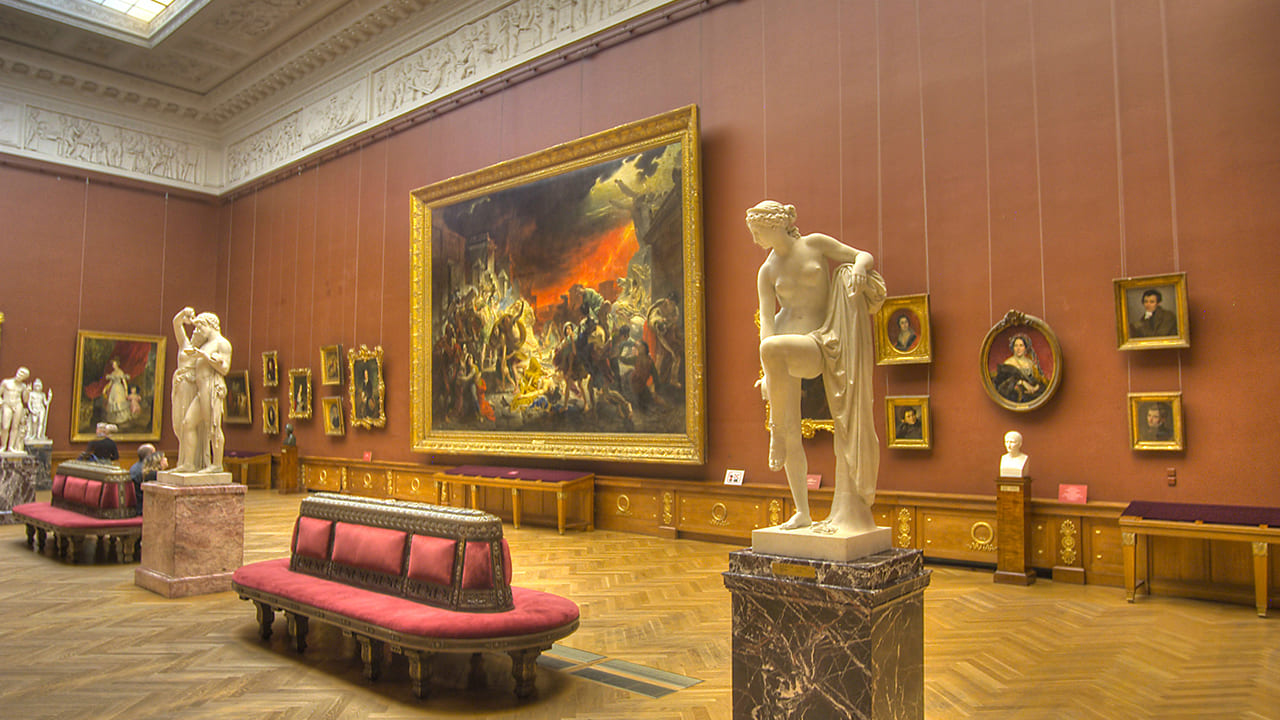 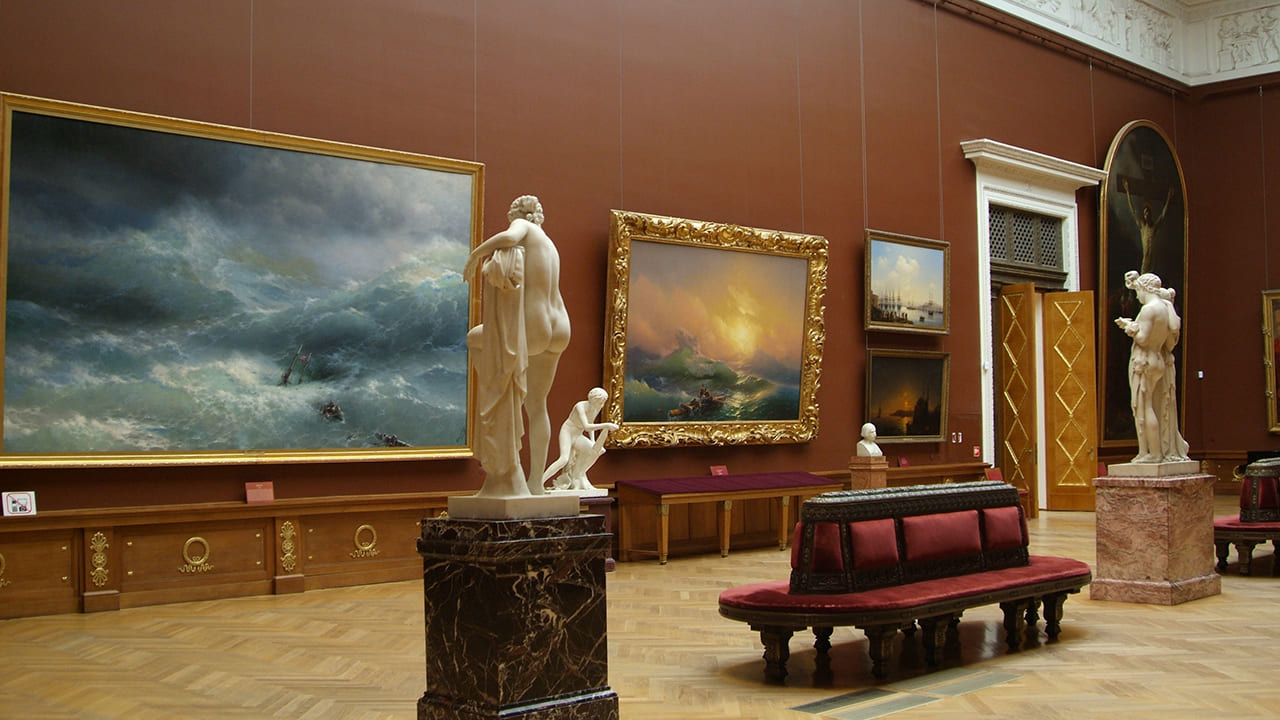 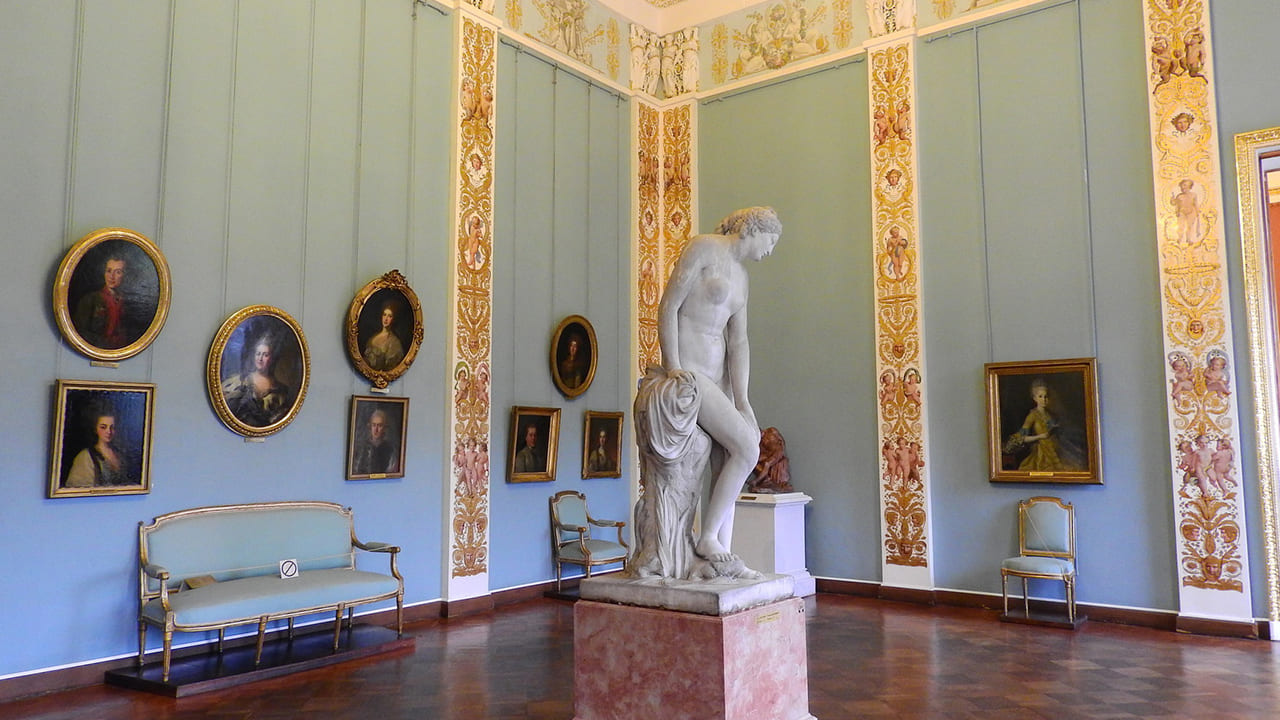 The State Russian Museum is the world’s largest collection of Russian art, housed in a unique architectural complex in the historical Centre of St Petersburg.

Have a private tour with skip the line admission tickets and learn more about the history of Russian Art.

It was the first museum of Russian art, initiated by Emperor Alexander III. Later, in 1895, Emperor Nicholas II signed a decree ordering “The foundation of a special establishment named ‘The Russian Museum of Emperor Alexander III’ and the assignment of Mikhailovsky Palace with all outbuildings, services and the garden, specially acquired by the state treasury for this purpose”. In May of same year architect Svinyin started the reconstruction of the palace interiors for accommodating future collections of art.

The solemn opening of the Russian Museum took place on March 1898. The basis of the collection was objects and works of art handed over from the Winter, Gatschina and Alexander Palaces, from the Hermitage and the Academy of Arts, as well as from private collections donated to the museum.

The museum collection contains over 400 000 exhibits covering all major periods and trends in the history of Russian art, all main types and genres, trends and schools of Russian art over more than a thousand years: from the X to the XXI century.

The State Russian Museum today is an extensive museum complex. It is a large authoritative research, restoration, preservation, and educational center, supervising the work of all art museums of the country.

The collection of Old Russian painting of the Russian Museum is one of the largest and most significant in our country. It includes around six thousand icons. The permanent exhibition at the Mikhailovsky Palace represents a part of this collection, the most valuable works of 12th-17th centuries from the major art centers of Old Russia: Novgorod, Pskov, Vladimir, Suzdal, Moscow, and Yaroslavl.

The most ancient icons are on display in the first hall. The gem of the collection is the icon “Archangel Gabriel” (“Angel Golden Hair”), a unique 12th-century monument of Kievan Rus. The 13th-century icon “Our Lady of Tenderness” (Belozerskaya) is the earliest surviving Russian Orthodox icon of the Virgin. Also, on display is the famous icon of Boris and Gleb. Created by a Moscow master in the middle of the 14th century, it is a rare image of the first Russian saints that has remained intact until the present day.

In the next hall, one can see works coming from the two large centers of icon painting: Novgorod and Pskov. Among them is a wonderful artifact of the 14th century—the Novgorod icon “St. George and the Dragon”. Farther on, there are works by the Moscow school of the 14th and 15th centuries. The central place is occupied by four icons from the iconostasis of the Assumption Cathedral in Vladimir: “St Peter”, “St Paul”, “Presentation of Jesus at the Temple” and “Baptism of Christ”, made in the studio of Andrei Rublev, a prominent painter of the late 14th and early 15th centuries. Also, on display is a group of icons from the Virgin Nativity Cathedral of the Ferapontov Monastery, executed by a well-known master of icon painting, Dionisius, and his apprentices. The final section of the exhibition consists of icons of the 16th and 17th centuries by painters who worked in Yaroslavl and Tver, and by the Stroganov School of icon painting. In the same hall, one can see one of the most important icons of the second half of the 17th century, “The Trinity” created by a famous artist of the Kremlin Armory workshop, Simon Ushakov.

The exposition of Russian art of XVIII century is chronologically organized and presents the main stages and trends of Russian art of this time. One part of the display is dedicated to the time of Peter I and focuses mainly on the names of Ivan Nikitin and Andrei Matveyev, the greatest portraitists and leaders of the secular Russian art of this time. Of great interest are the works by Anton Losenko, who established the genre of historical painting in Russian art. The exposition of XVIII century also includes works of art by the greatest sculptors of this period – Carlo Bartolomeo Rastrelli, Feodosy Schedrin, Ivan Prokofiev, Mikhail Kozlovsky, Fedot Shubin. Specific place is given to the examples of Russian decorative and applied art of this epoch – furniture, chandeliers with rock crystal, mosaics from Lomonosov’s workshop, tapestries of St Petersburg manufacture etc.

The display shows masterpieces representing the variety of trends in Russian art of the time (classicism, romantism, and beginning in the second third of the XIX century realism). The works by academic school masters are also widely represented: the canvases by Karl Brullov (the famous «The Last Days of Pompeii», religious compositions and portraits of the artist’s contemporaries), historical paintings by Grigory Ugryumov, Alexander Ivanov, Alexey Egorov, Fyodor Bruni.

Even when it first opened back in 1898, the Russian Museum owned many canvases painted by such masters of the second half of the nineteenth century as Ivan Aivazovsky, Konstantin Makovsky, Ilya Repin, Vasily Polenov and Vasily Surikov. Although the selection of works before the revolution was often hampered by the conservative tastes of museum officialdom, the collection nevertheless grew in breadth thanks to the efforts of Alexander Benois, Albert Benois, Igor Grabar and Pyotr Neradovsky.

Permanent exhibition of Russian Folk art of XVII-XXIth centuries includes some 1,500 exhibits. Arranged chronologically, they show history of development of peasant art and of local centers of artistic crafts, all their main kinds and genres.

The Russian Museum holds one of the largest collections of works of the early Russian avant-garde and its leading artists, which is presented in the permanent exposition in the Benois Wing.  All the main innovative trends of the middle of the second decade of the XX century are represented.

The collection of the museum comprises works by representatives of large schools that existed in the Soviet times (e.g., Leningrad school of landscape painting of the 1930s — 1950s). The art of socialist realism, showing high artistic merit, clarity of plot, a tendency for “grand style”, is reflected in the paintings by A.A. Deyneka, A.N. Samokhvalov, A.A. Plastov, Yu.I. Pimenov and many other Soviet artists who continued to work during the Great Patriotic War and in the second half of the XX century. The most valuable part of the collection of Soviet art of the Russian Museum includes works by representatives of the “severe style” and relating trends of Soviet art of the 1960s and 1970s.