Museum of Political History of Russia 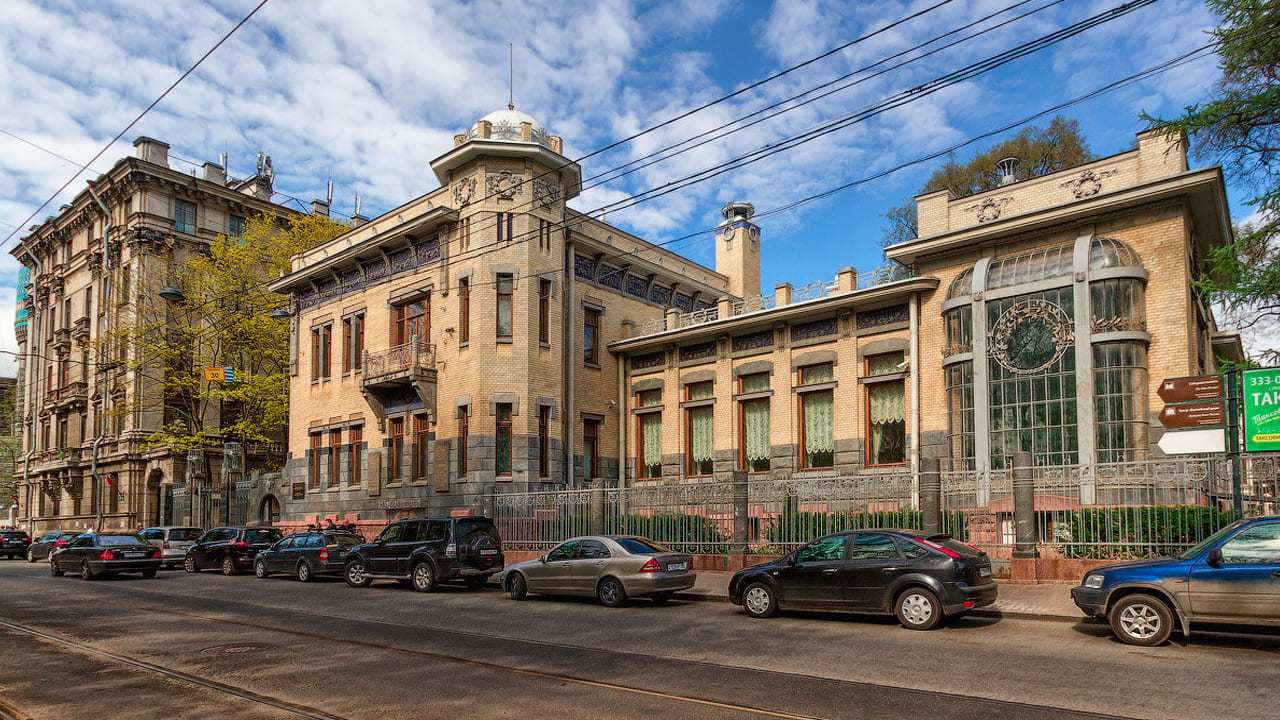 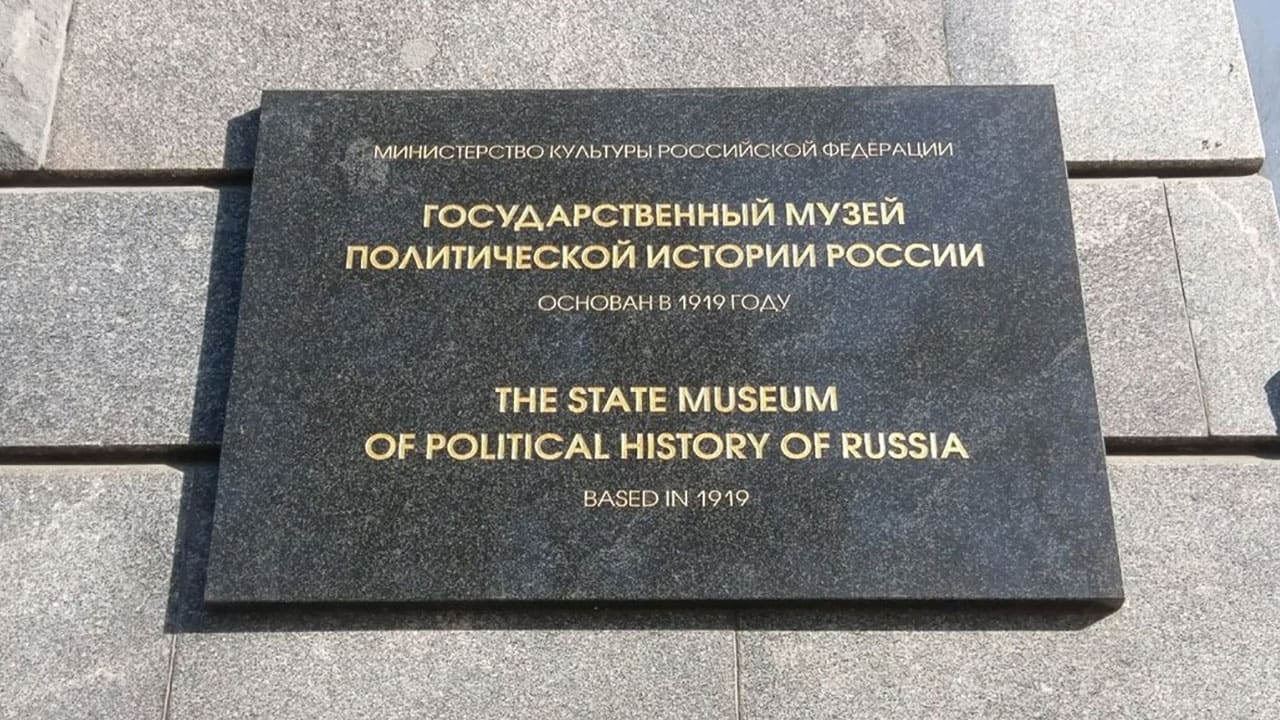 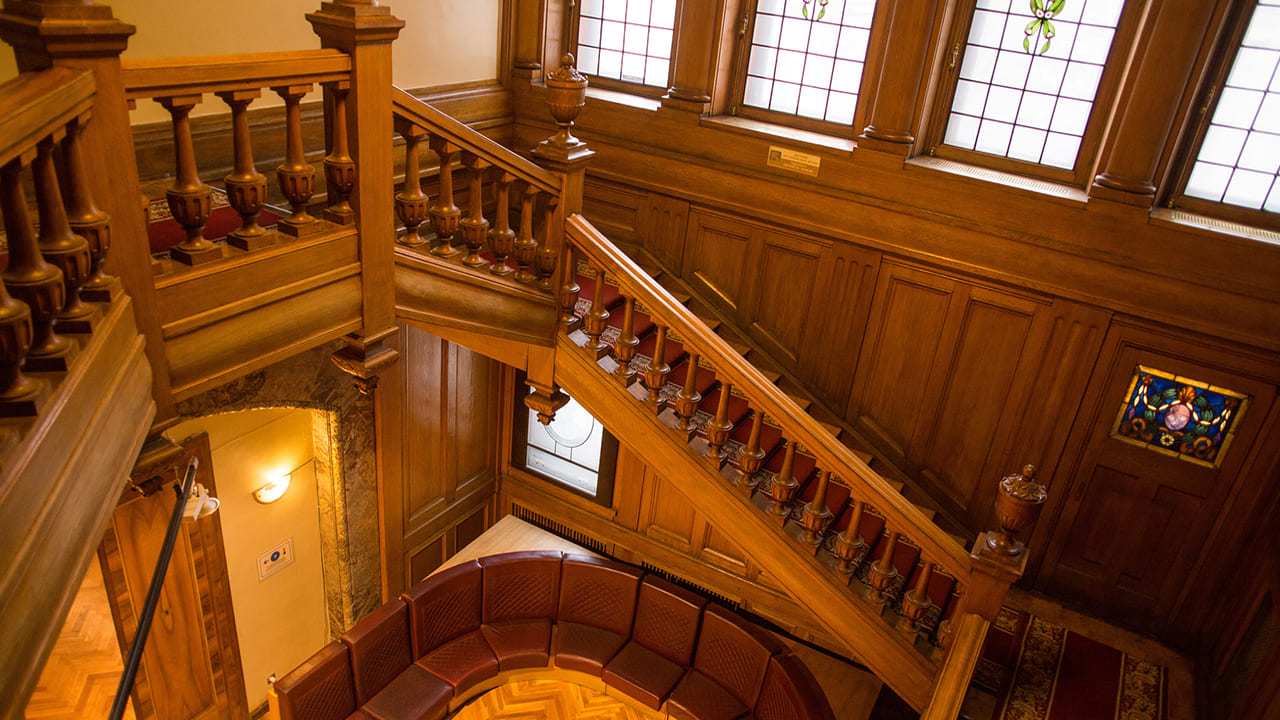 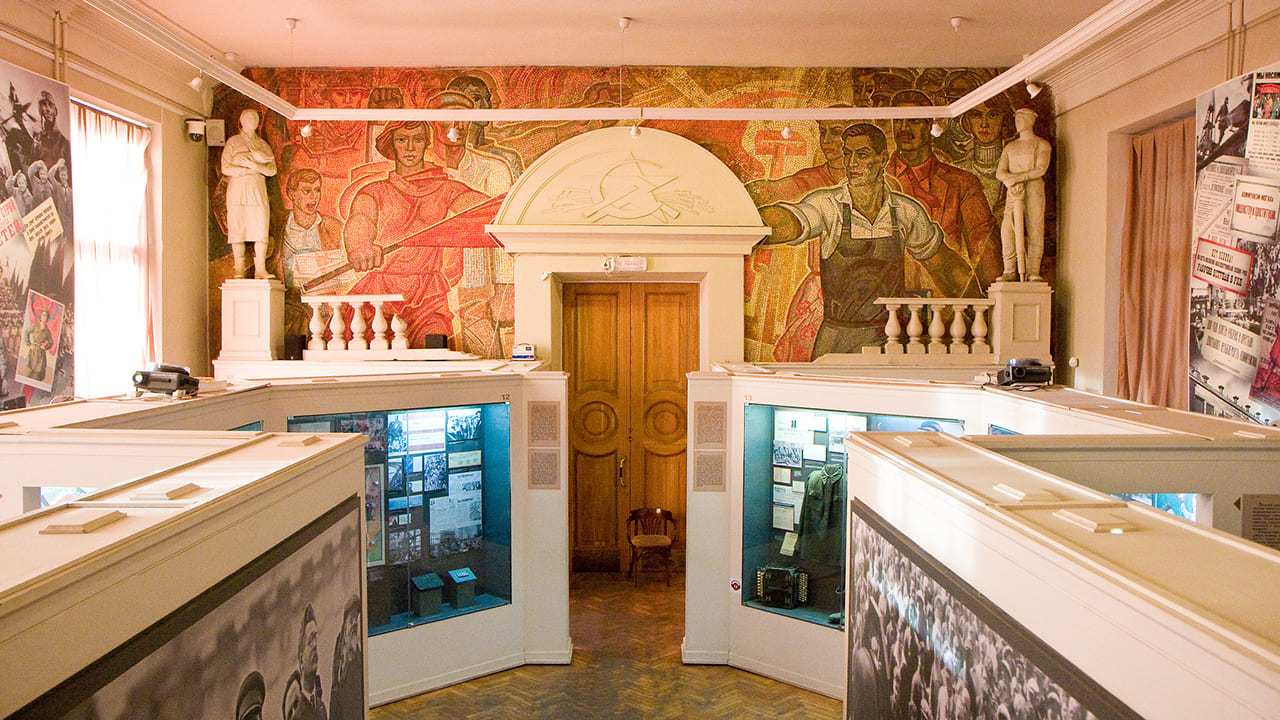 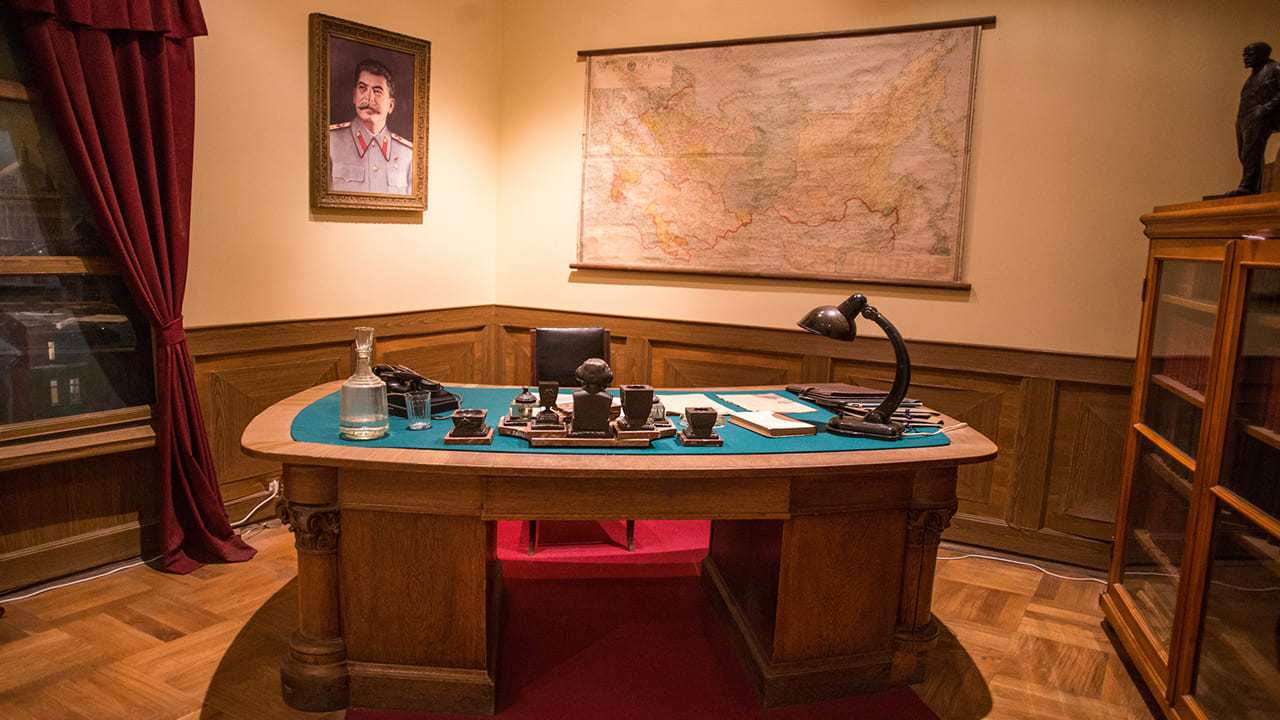 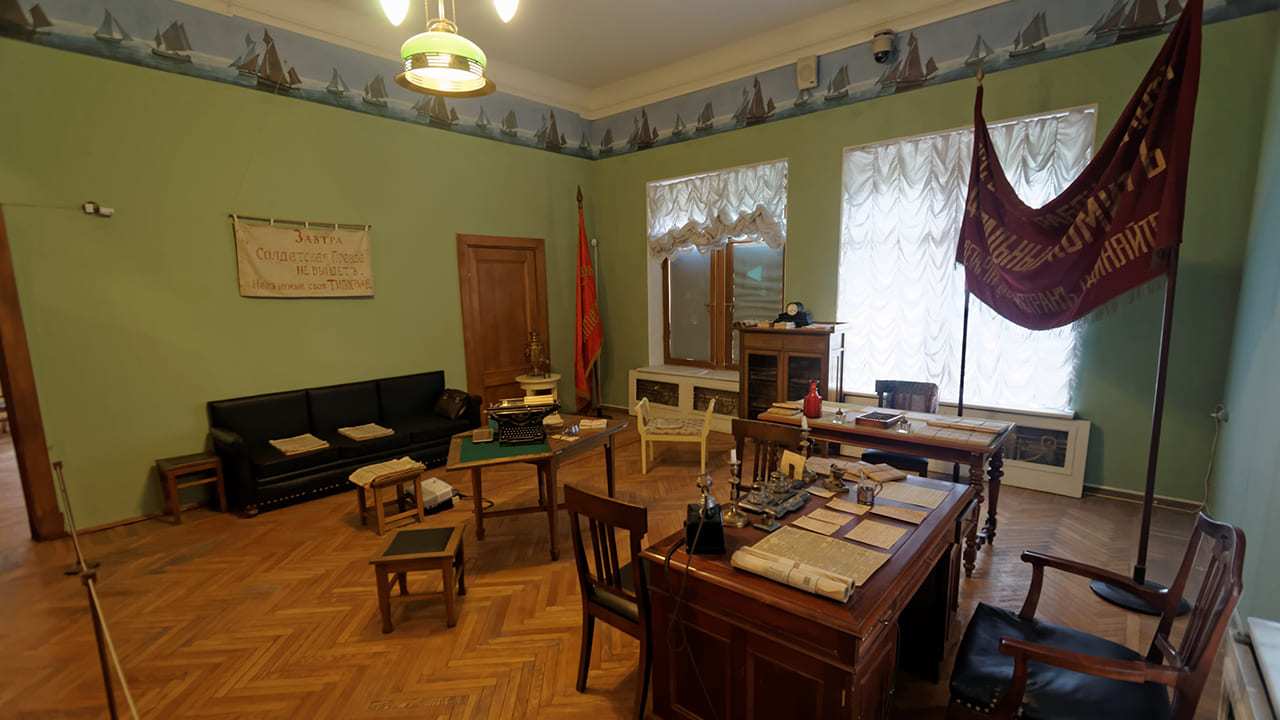 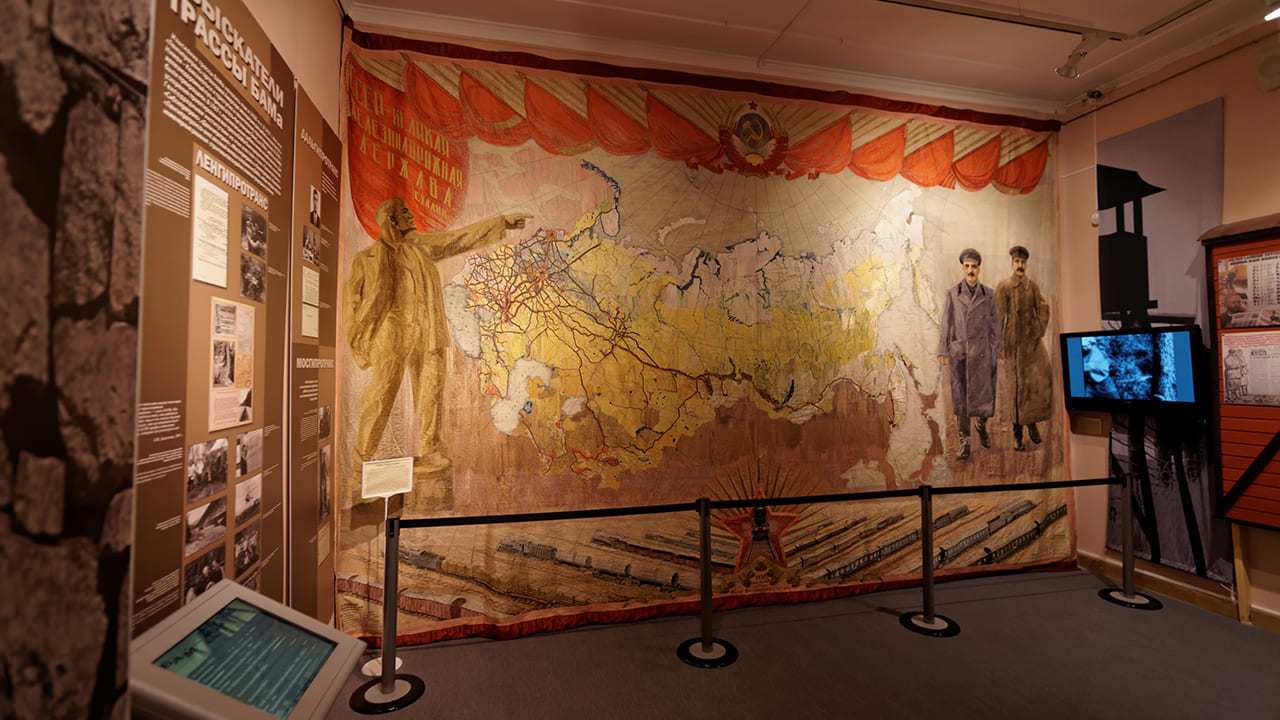 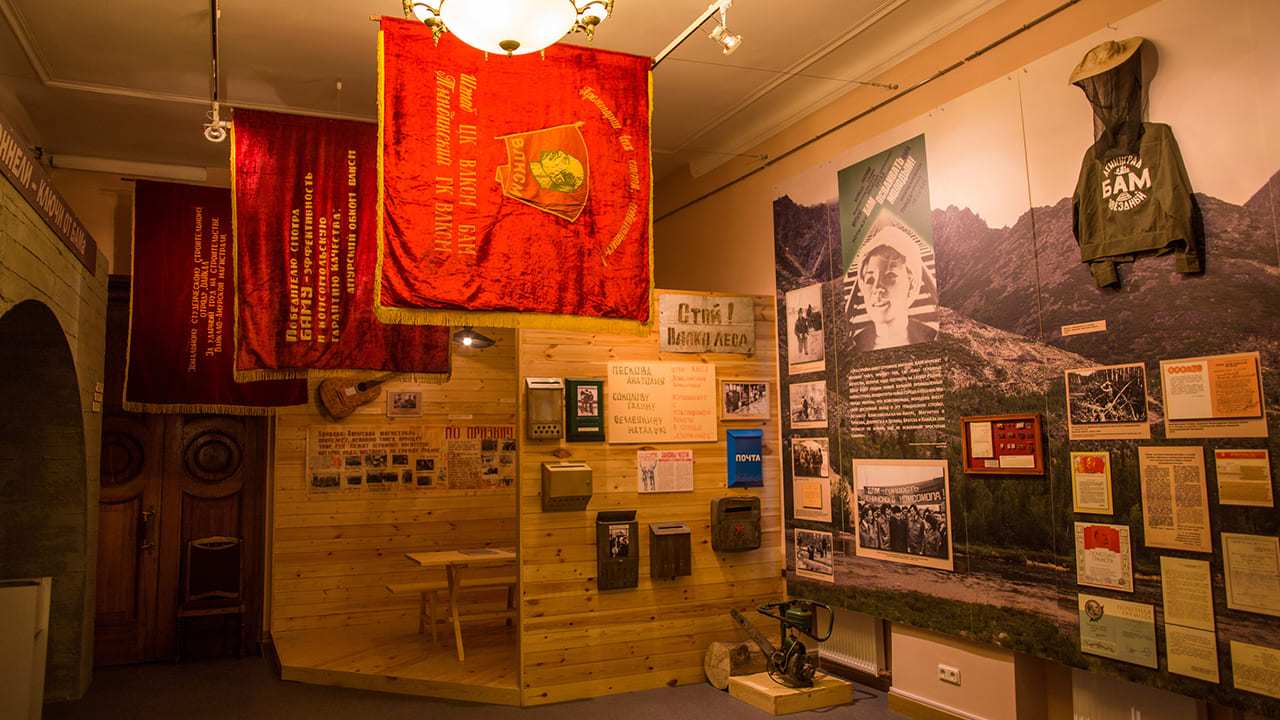 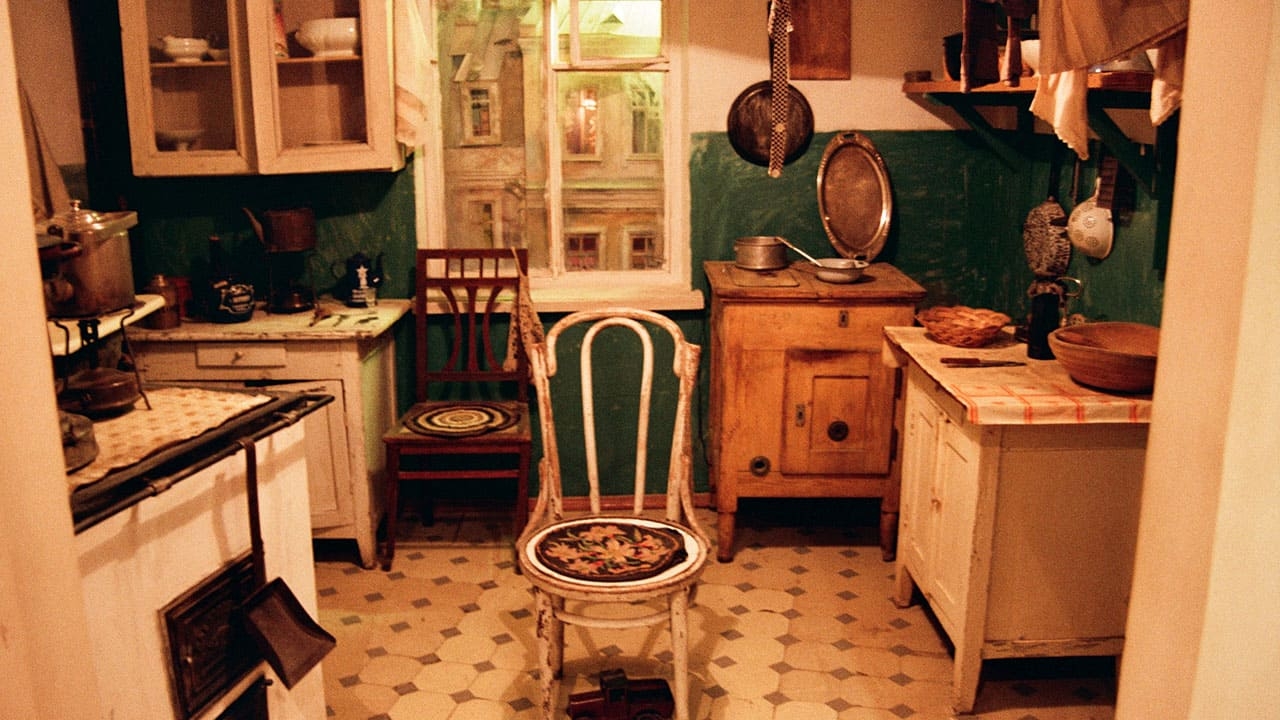 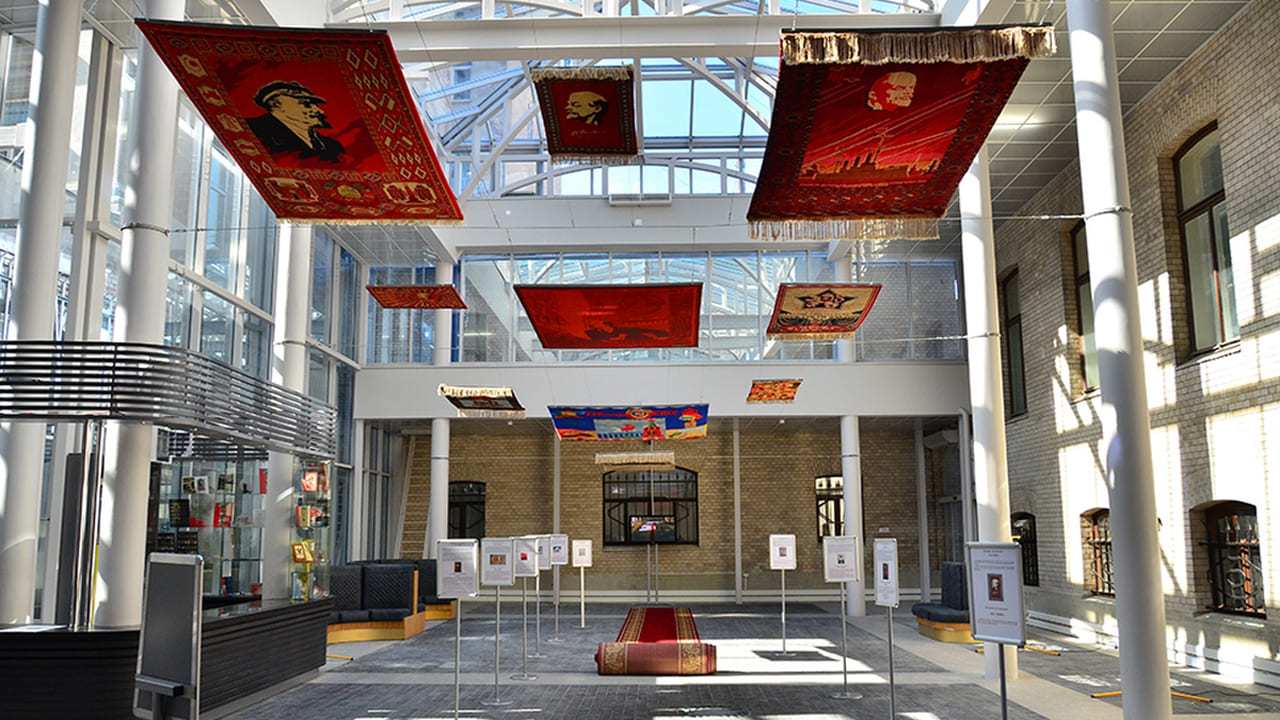 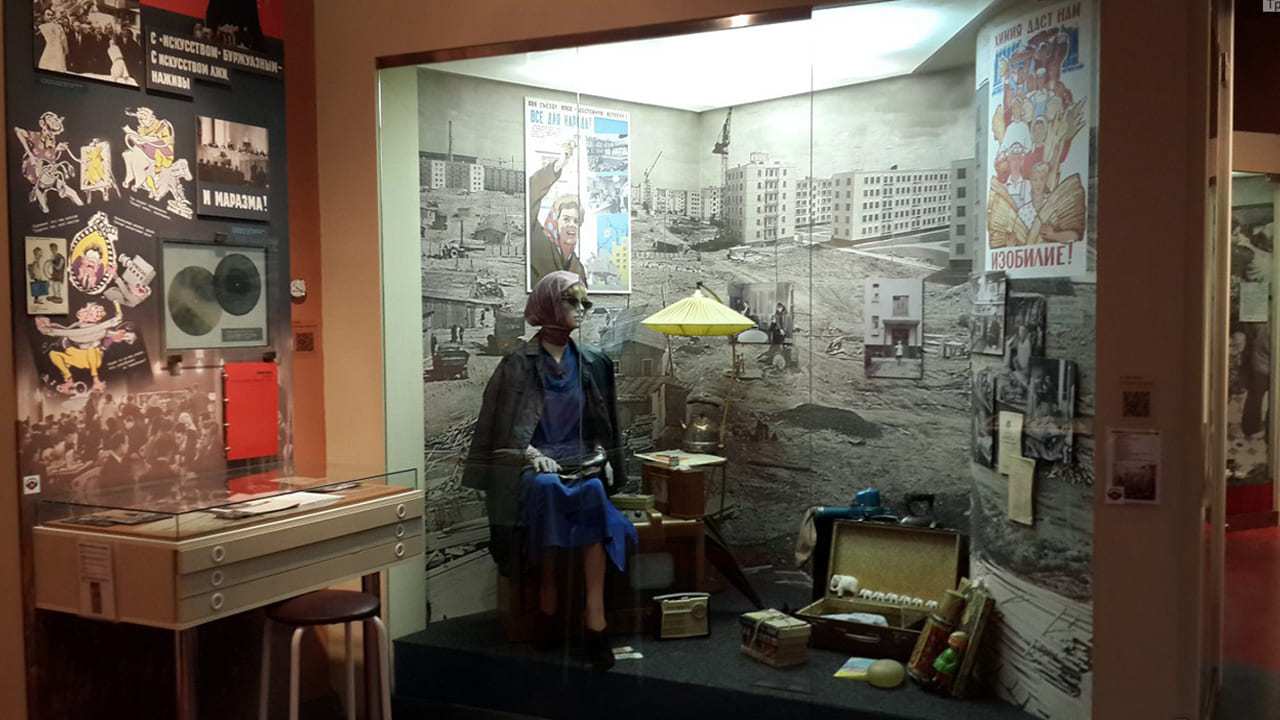 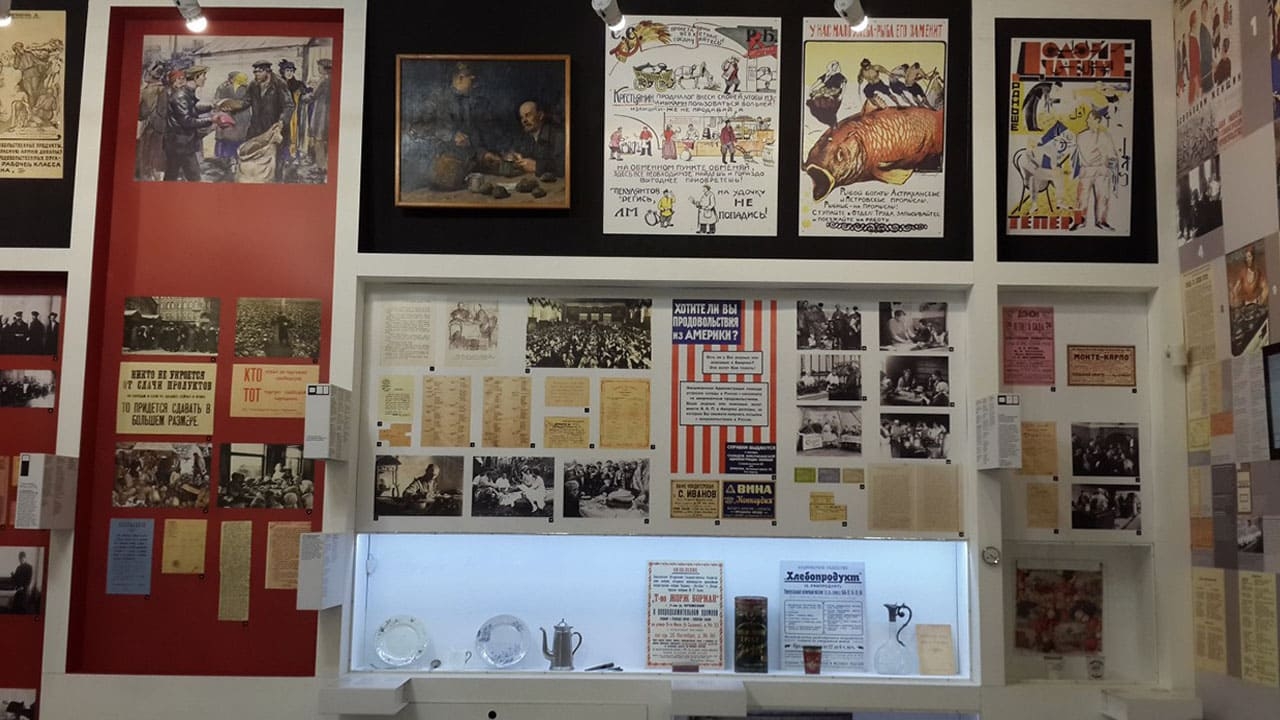 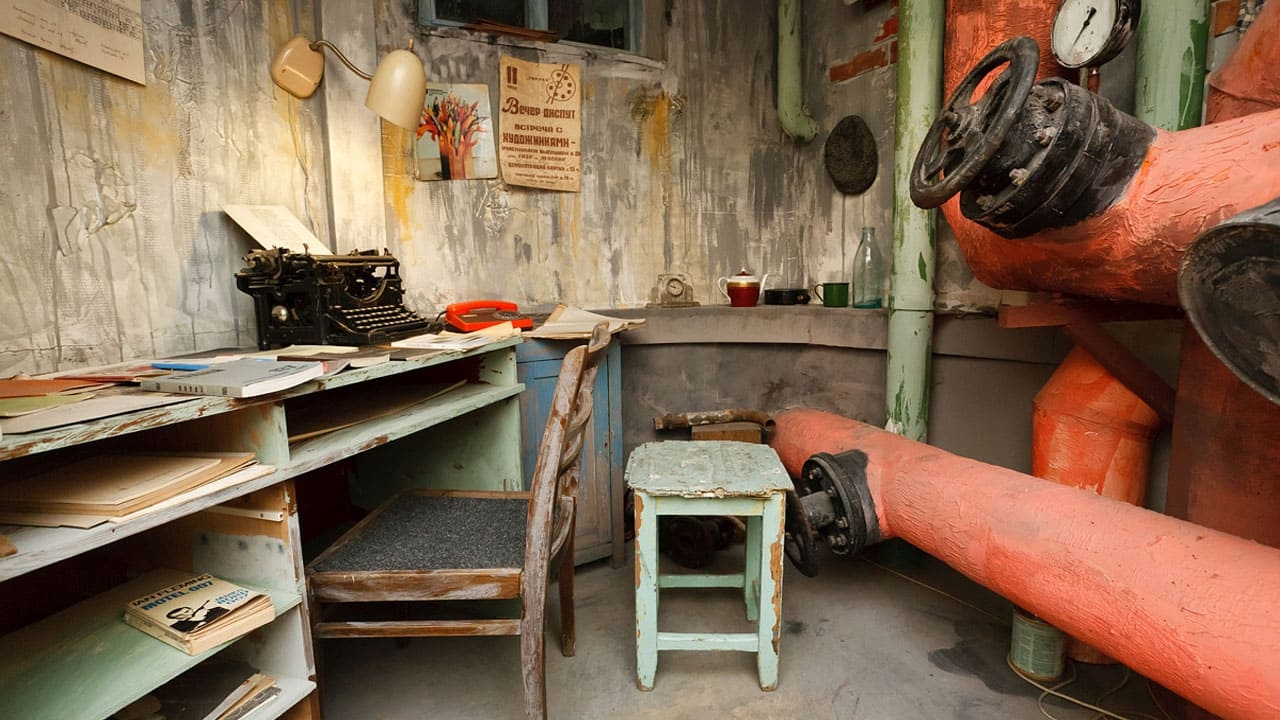 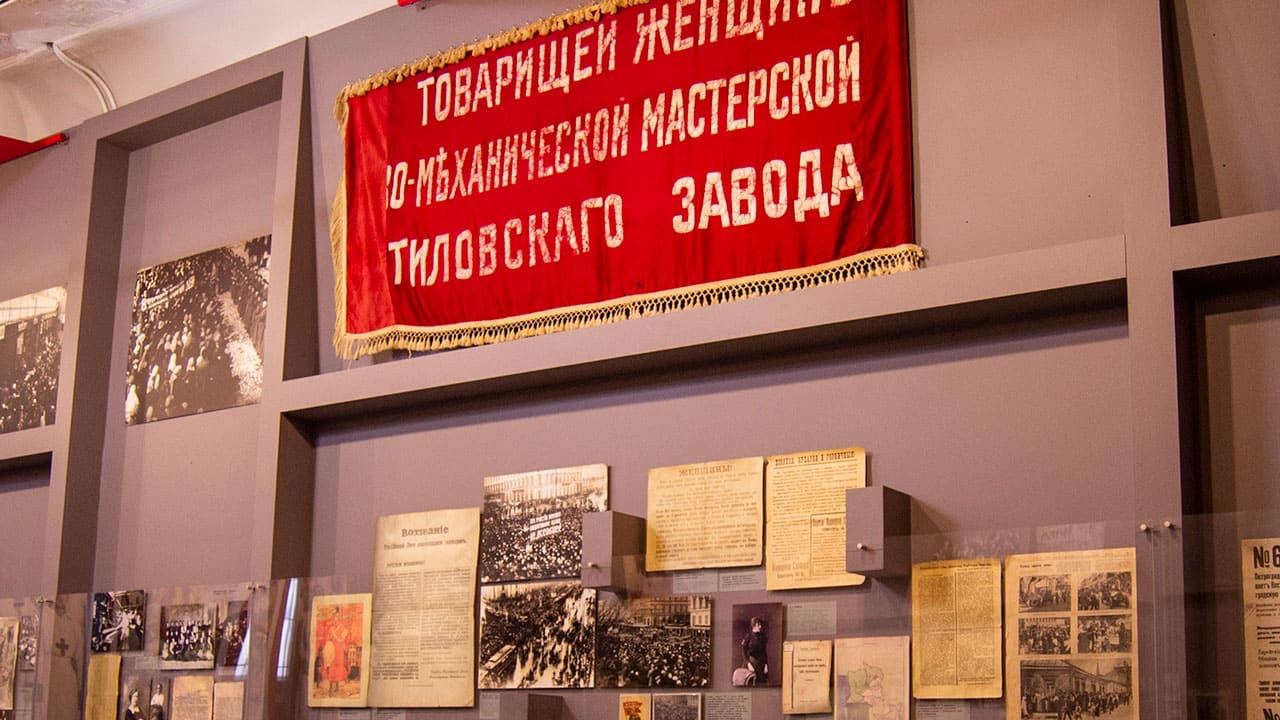 The first museum in Russia devoted to the history of the revolution was founded in 1919.

This is the place to come for a dose of Soviet memorabilia, such as posters, banners, you can even see Lenin’s actual office, preserved as it was when he was based here. The museum’s collection spans political history from the 18th century to the present days.

Our agency provides you with pree-boked tickets to skip the entrance line. Have a private tour with our guide to learn more about political history of Russia.

In 1955 the Museum got two buildings: Kshesinskaya and Brandt’s mansions. In 1955-1957 these two buildings were joined, and now they make up a complex where the Museum had been situated.
The mansion belonging to a timber merchant Vasily Brandt was constructed in 1909-1910 after the design of Roman Meltser, an outstanding Petersburg artist and architect of the late 19th-early 20th centuries. It represents a sort of interaction between different architectural styles of the beginning of the 20th century – Neoclassicism, Art Nouveau, and Symbolism (this style is represented by relief images which decorate the building).
The owner of the mansion, Vasily Brandt, was a manager of the trade company “Brandt E.G & Co.”, hereditary freeman of St. Petersburg, member of the Board of Petersburg Discount and Loan Bank. He specialized in timber trade, was member of the Board of Partnership of Belomorsky timber manufactory and the director of the Partnership of Kemsky saw-mills.
In 1917, immediately after the revolution, Vasily Brandt left Russia, and a children’s boarding school was situated in his mansion. In 1918 some rooms were occupied by Michael Kalinin, Commissar of city economy of Petrograd Labor Commune. Later the city Committee of the LYCLSU (Lenin’s Young Communist League of the Soviet Union) was situated here. Since 1957 Brandt’s mansion has been part of the Museum complex.
The second mansion, former property of Prima-ballerina of the Mariinsky Theater Mathilda Kshesinskaya, was built in 1904-1906 by architect Alexander Ivanovich von Gogen. This building is attractive due to its asymmetrical composition, strict elegancy, graphical definition, diversity of shapes, and a variety of decorative materials. It can be even called a model of Art Nouveau style.
Mathilda Kshesinsksya is believed to be one of the brightest representatives of Russian Academic Ballet School. Her performances were distinguished by bravura, cheerfulness, and at the same time by virtuoso technique and classical perfection. When she was the owner of the mansion, a lot of outstanding people connected with the world of music and dance visited her.
M. Kshesinskaya was rather close to the Imperial family, and this fact made her leave the mansion during the February Revolution of 1917.
In 1920 she left Russia for ever. The building was occupied by soldiers of Petrograd armored battalion, and later several revolutionary organizations were situated here. The mansion became one of the centers of political life in revolutionary Petrograd. Some prominent figures of the Bolshevist Party worked here: The Party leader Vladimir Lenin, members of the Central Committee Josef Stalin, Grigory Zinovjev, and others. In the course of July crisis of 1917, Bolshevistic organizations had to leave the mansion, and the Provisional government’s troops occupied it.
After October 1917 different state institutions were located in this building. In 1937 it was given to Sergey Kirov’s Museum. In December 1954 the Executive Committee of Leningrad Soviet made a decision to place the State Museum of the Great October Socialist Revolution in the mansion. Later, in 1991, the museum was renamed and since that time it has been called the State Museum of Political History of Russia.

History of the Museum Collection

Nowadays collection counts about half a million exhibits, and it includes a number of invaluable family relics which they have donated to the museum.
The idea to create a collection for a future Museum of Revolution appeared in the days of the first Russian revolution. Representatives of different public movements – from narodniks to Bolsheviks – realized the necessity of starting such a collection. In 1907, independently of one another, they decided to preserve evidences of their political activities for future generations.

In fact, the collection started in the same 1907, which was 12 years earlier than the museum itself was officially created. It became the first considerable part of an extremely rich gathering of revolutionary relics. This collection has preserved for us a unique scent of the time which got the name “the epoch of great shocks”. It was these first exhibits that predetermined the image of the museum’s predecessor – the State Museum of Revolution which was created in Petrograd in October 1919.

The collection includes objects connected with the history of revolutionary movement and political prisoners’ life and activities. You can also find here Russian underground and foreign “free” periodicals which were gathered by members of the “Narodnaya Volya” movement, prisoners of Shlisselburg convict prison, and Bolsheviks.

By the mid-1920s the museum had a unique collection of revolutionary banners, a very important gathering of leaflets issued by different political parties, posters, photos and other items. The museum collection illustrates the heroic and tragic history of our country for the period of more than 200 years, and it certainly is one of the most interesting collections dealing with the problems of state structure history, public movements, political life of Russia in the 19th-20th centuries. Relics concerning the Soviet period and modern history of Russia, materials telling about the centennial history of Russian Parliamentarism and activities of modern political parties and movements have become part of the collection. Documents and personal belongings of outstanding public figures of the past and the present have enriched the museum stocks.

Museum of Political History of Russia