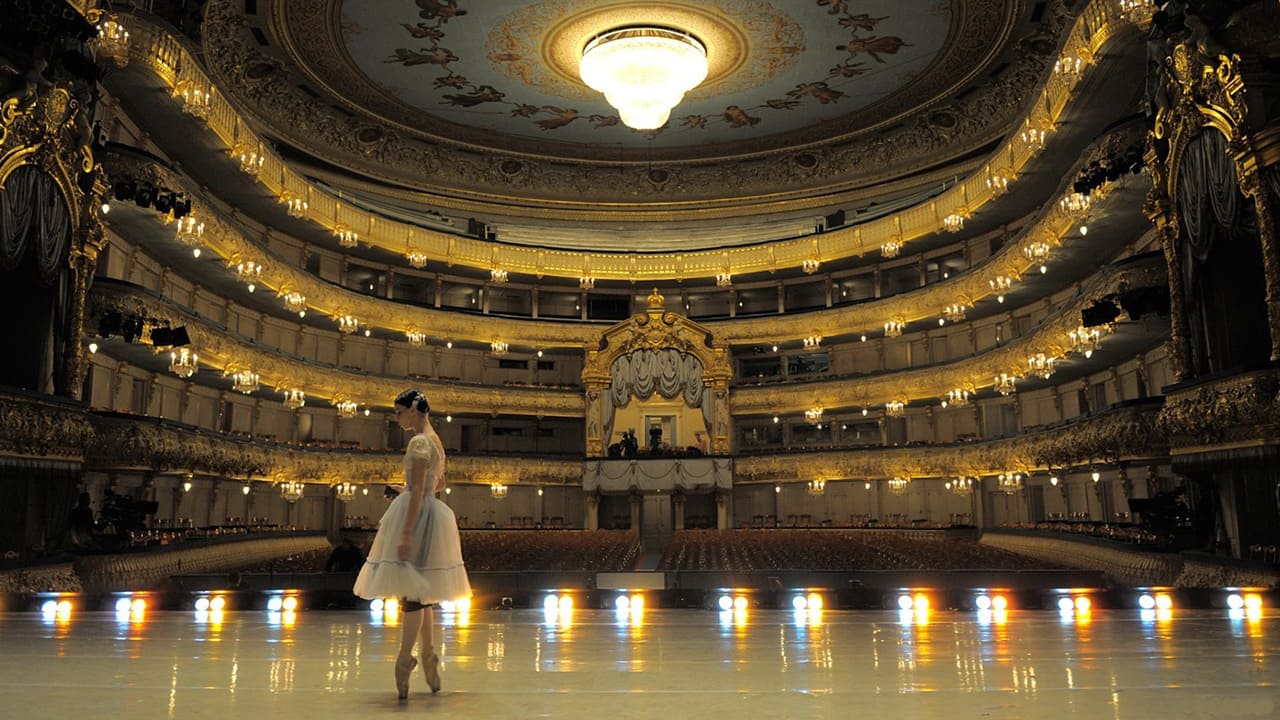 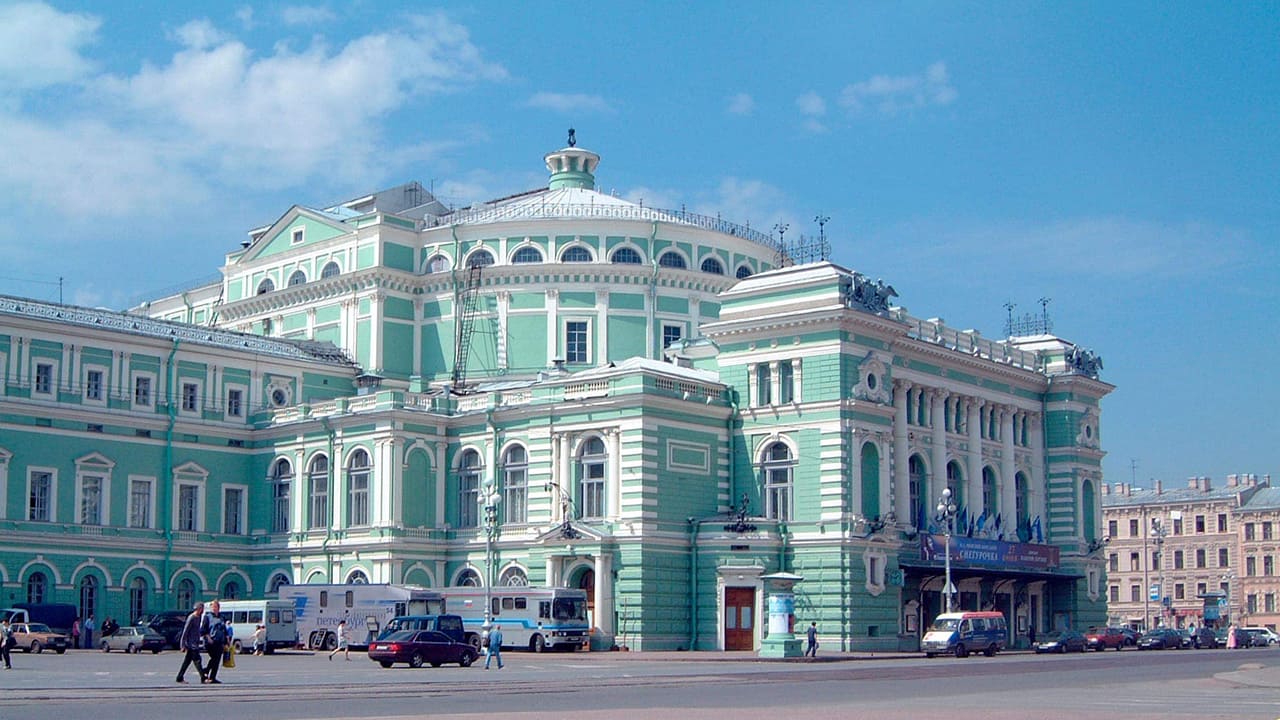 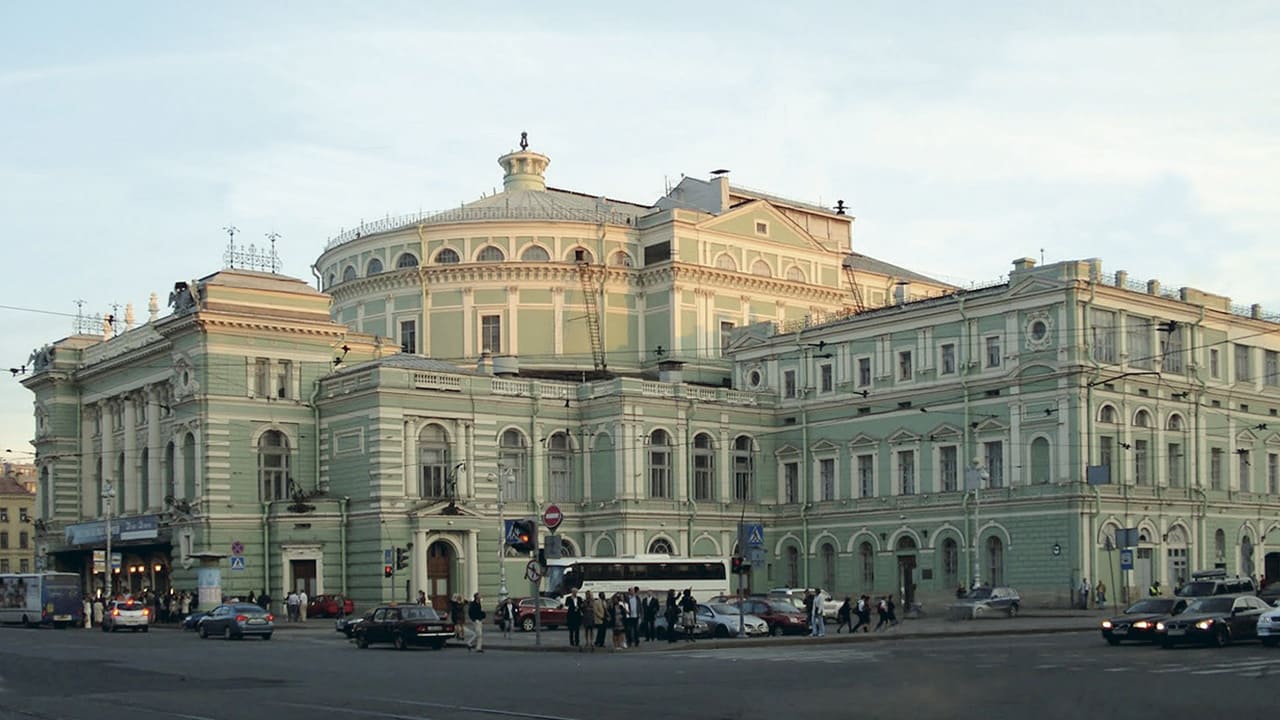 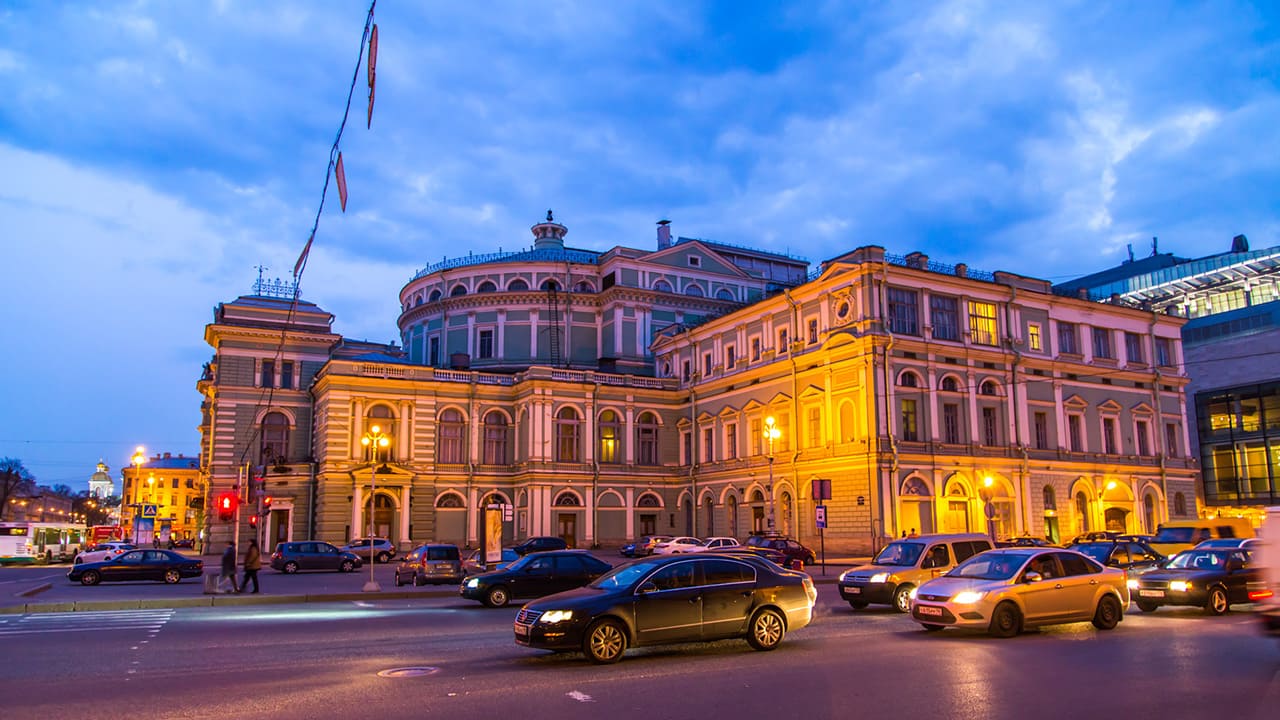 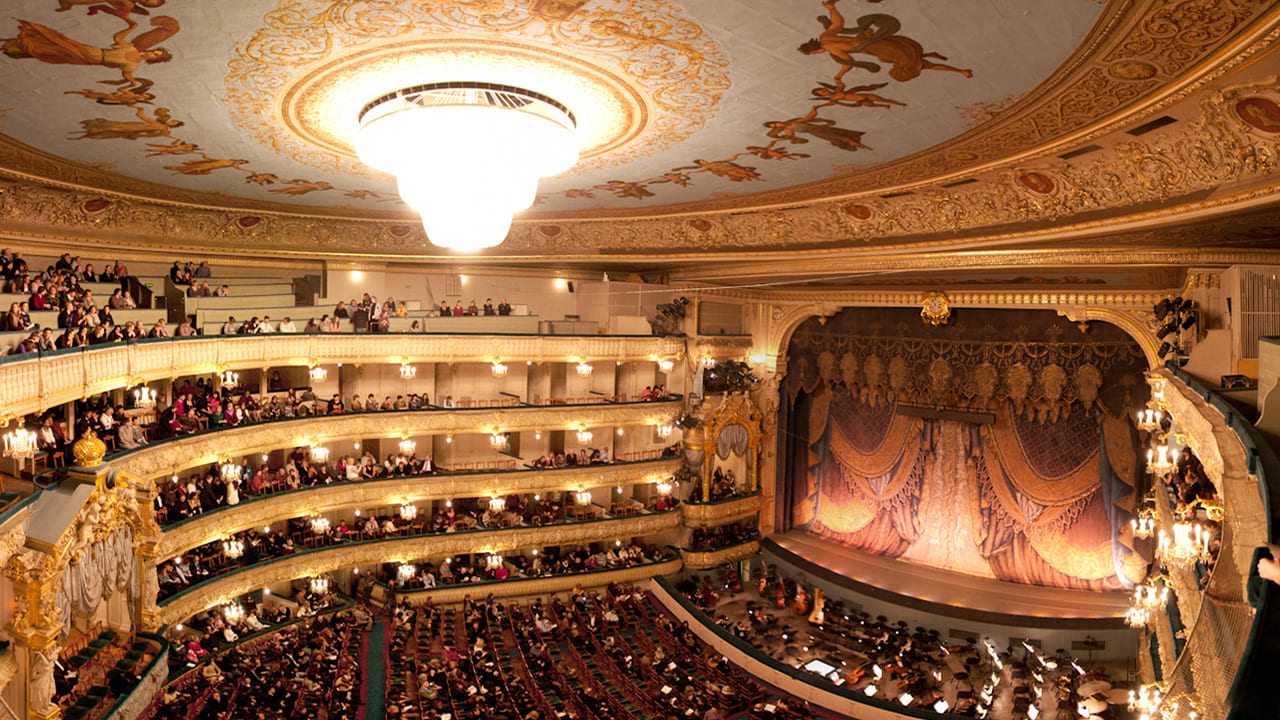 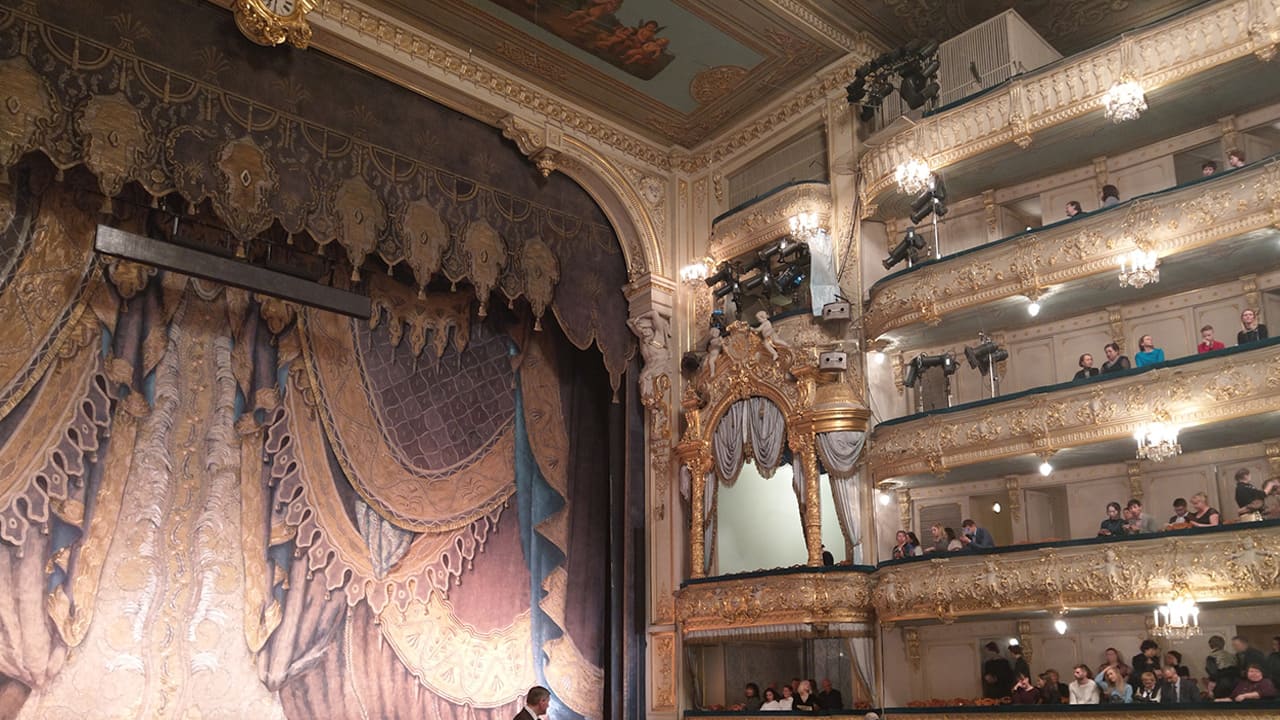 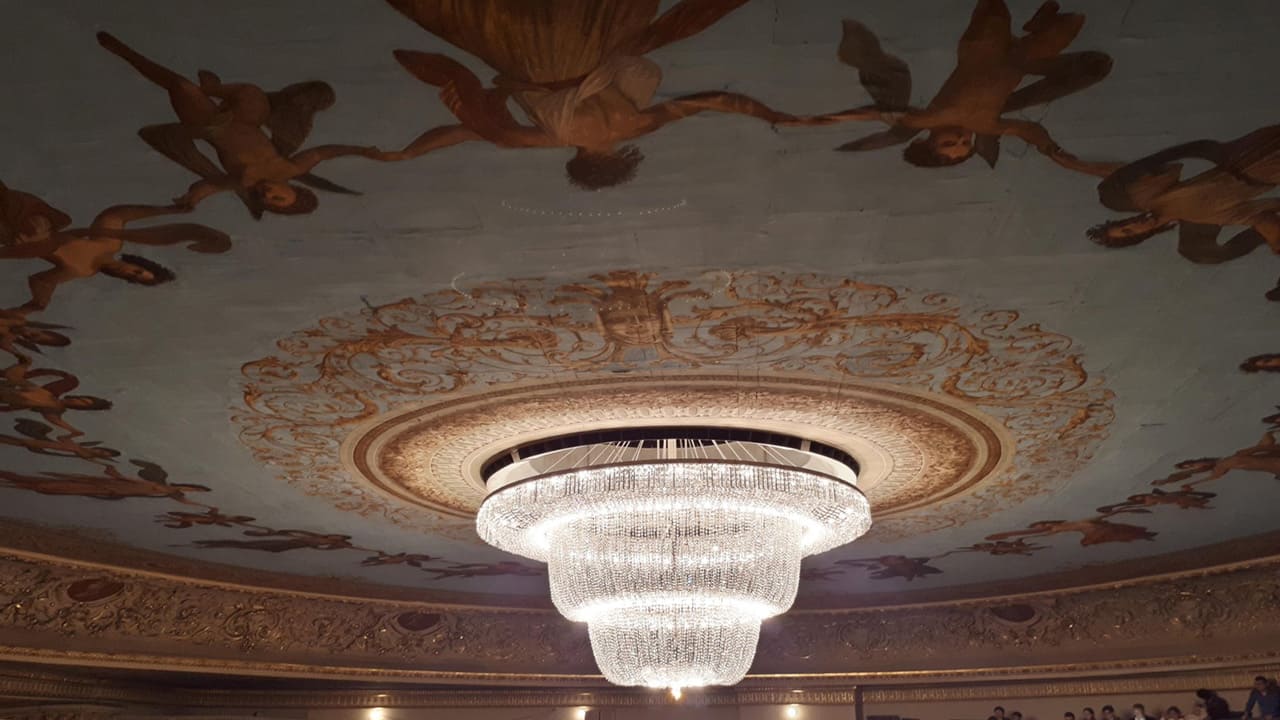 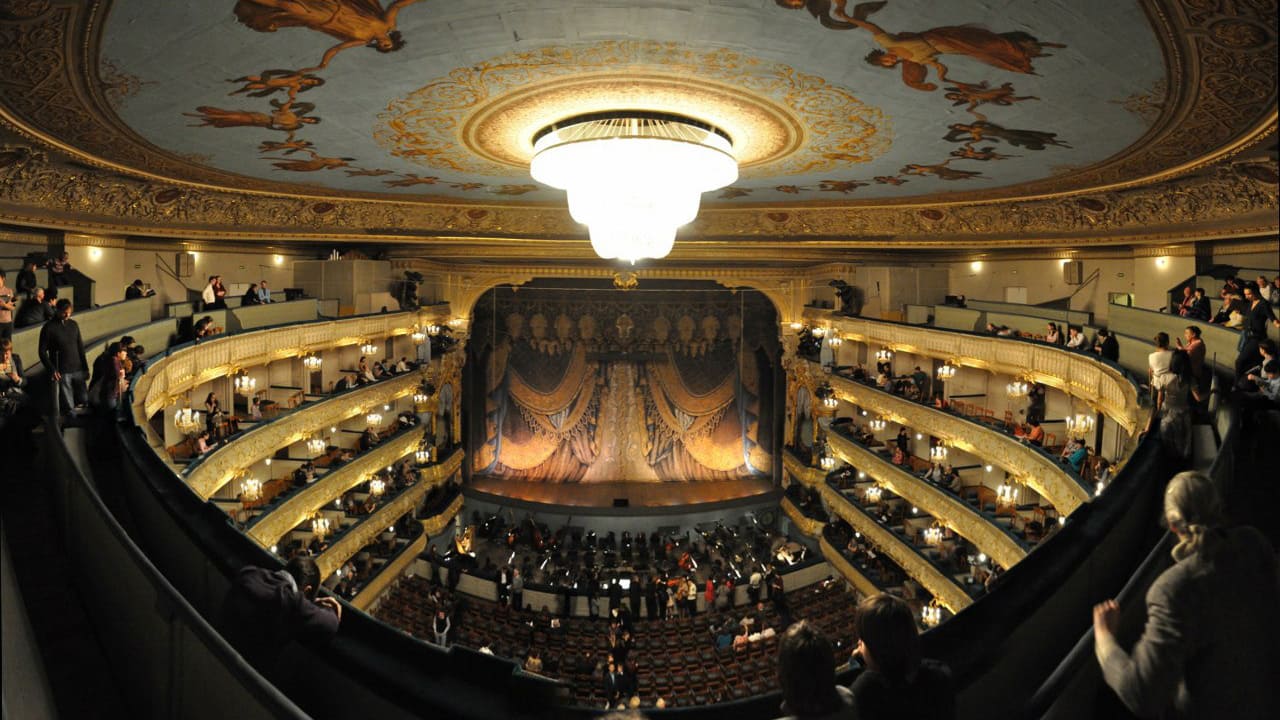 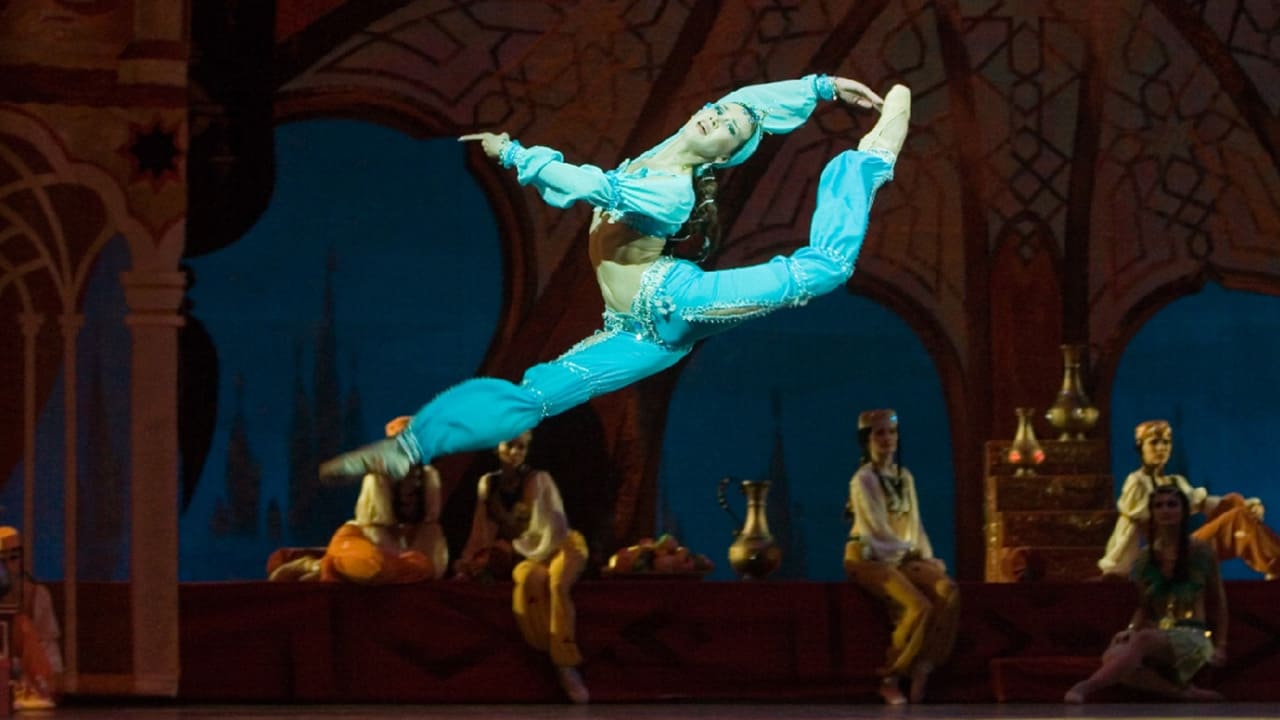 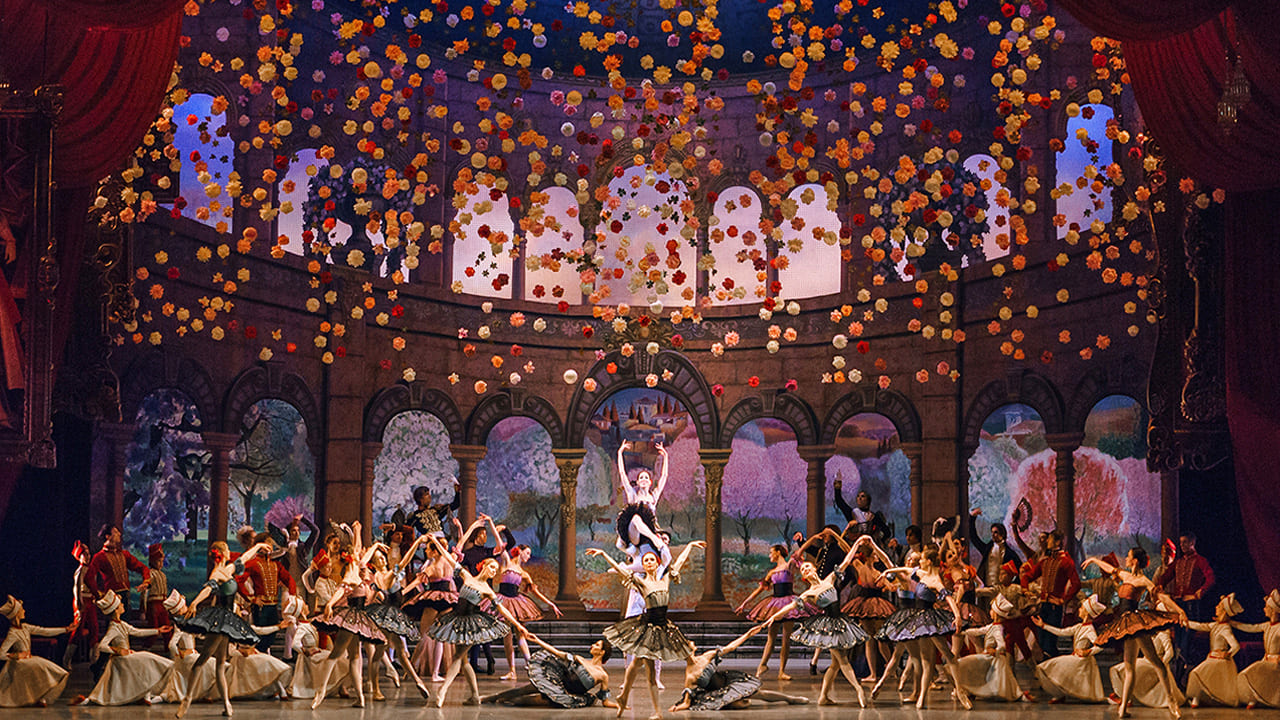 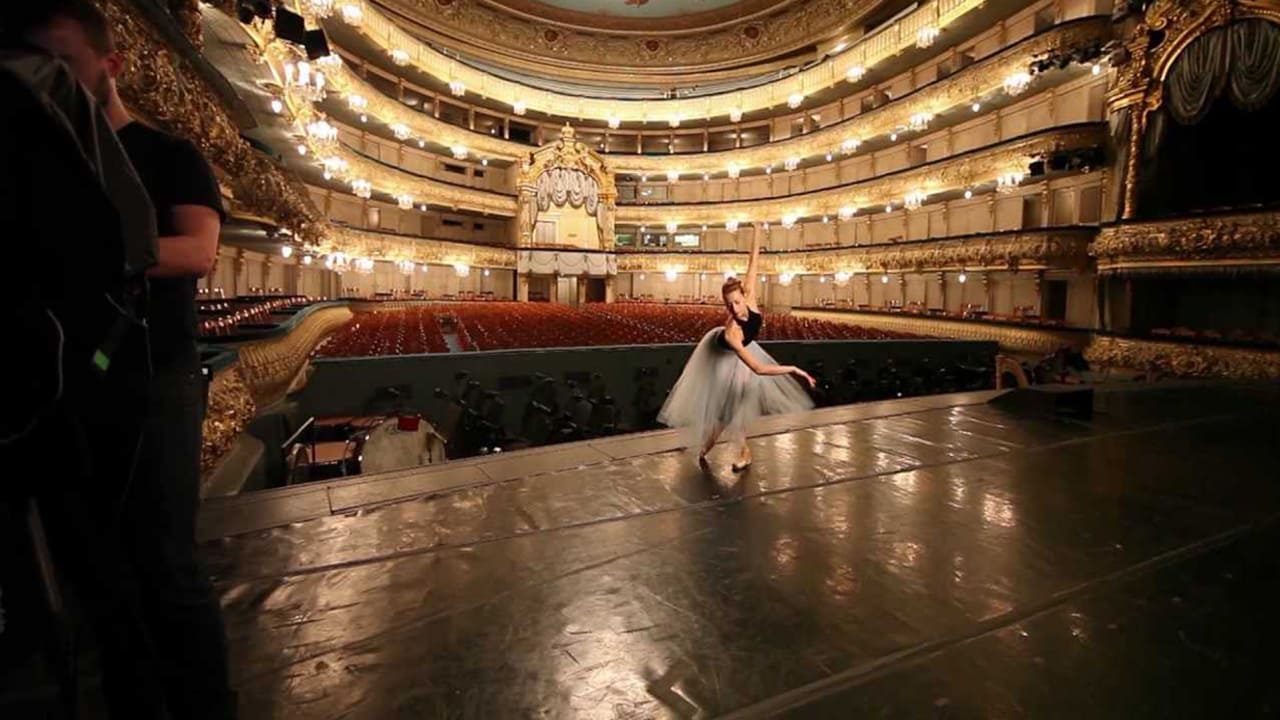 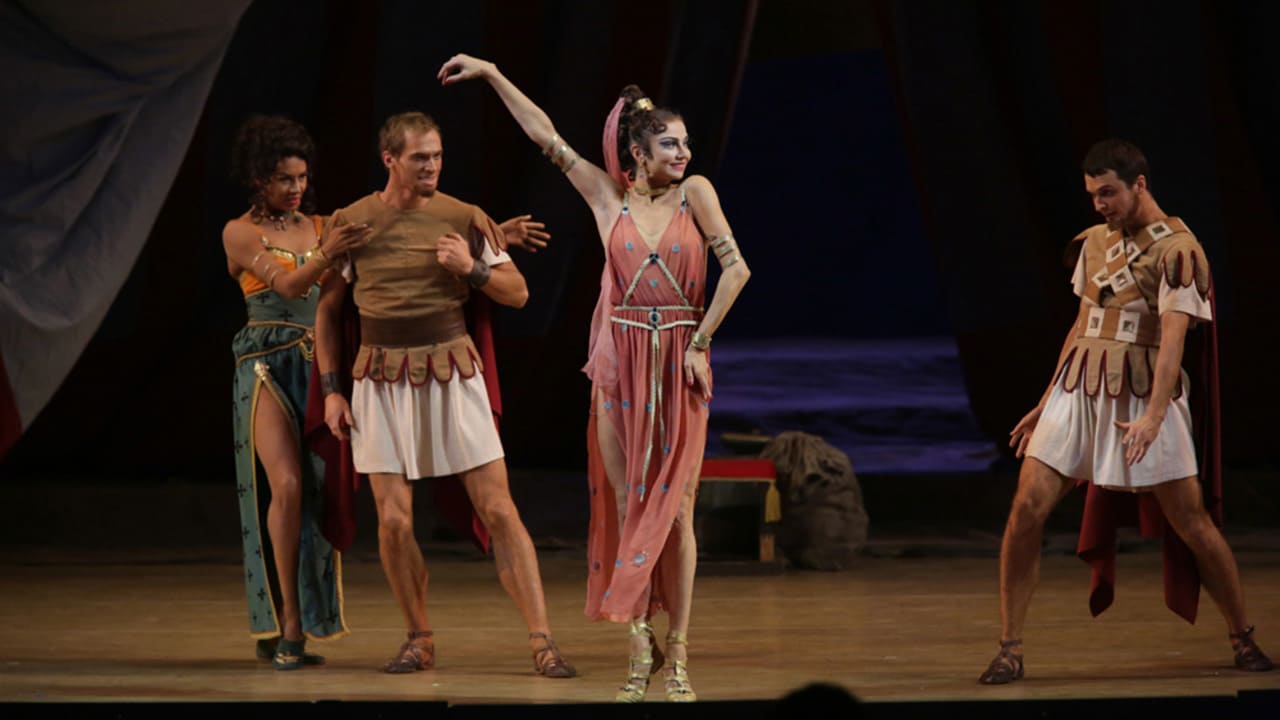 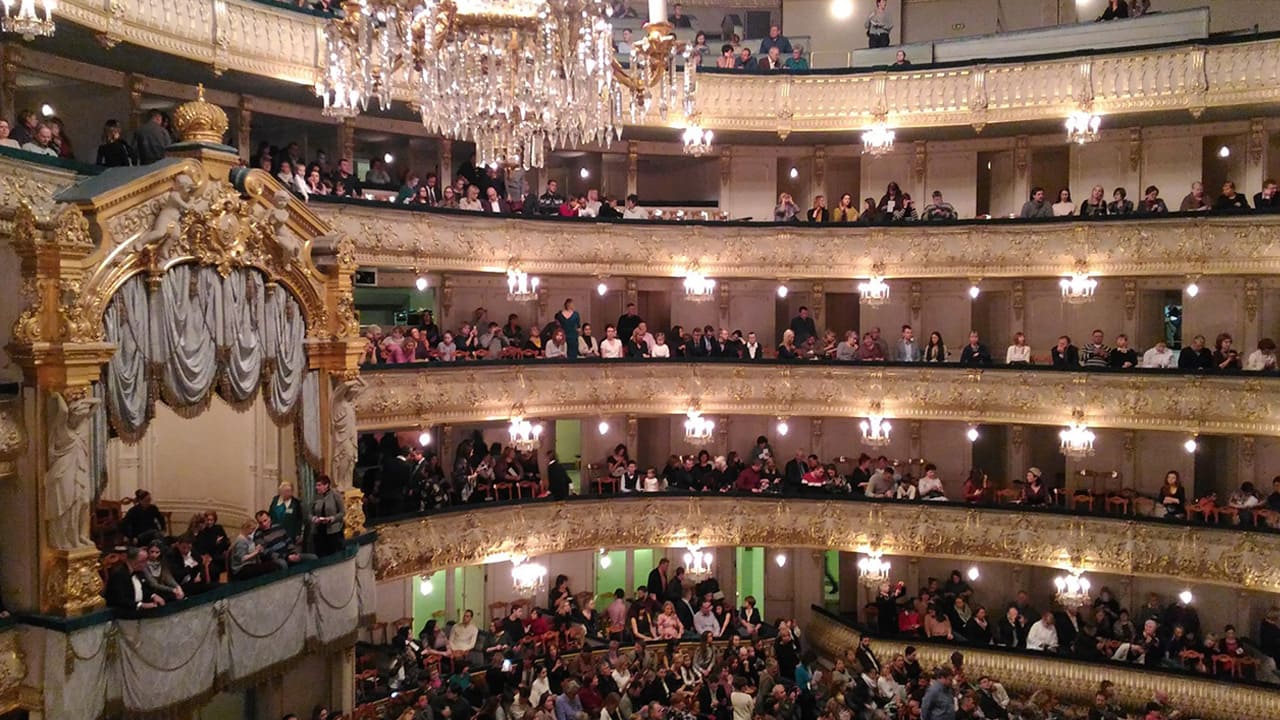 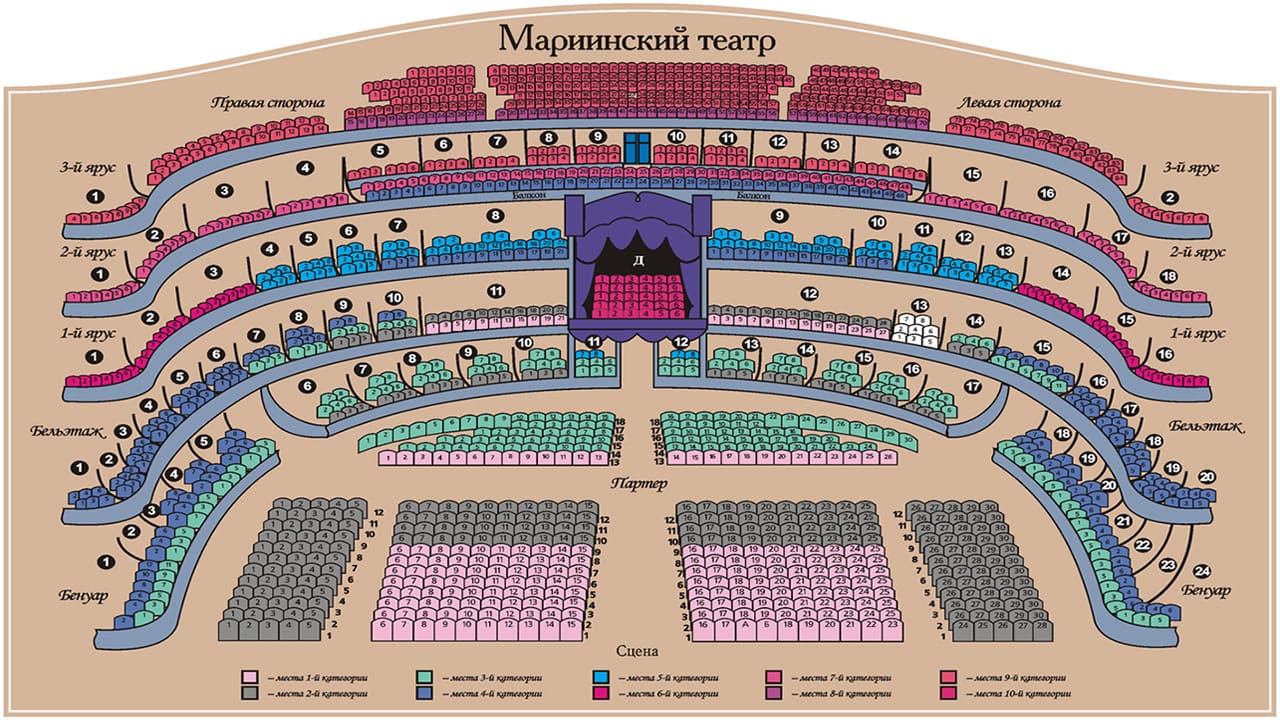 The Mariinsky Theatre is a historic theatre of opera and ballet in Saint Petersburg, Russia. Opened in 1860, it became the preeminent music theatre of late 19th-century Russia, where many of the stage masterpieces of Tchaikovsky, Mussorgsky, and Rimsky-Korsakov received their premieres. Through most of the Soviet era, it was known as the Kirov Theatre.

The theatre is named after Empress Maria Alexandrovna, wife of Tsar Alexander II. There is a bust of the Empress in the main entrance foyer. The theatre’s name has changed throughout its history, reflecting the political climate of the time

The Imperial drama, opera and ballet troupe in Saint Petersburg was established in 1783, at the behest of Catherine the Great although an Italian ballet troupe had performed at the Russian court since the early 18th century.

For more than two centuries the Mariinsky Theatre has been presenting the world with a plethora of great artistes: the outstanding bass and founding father of the Russian operatic performing school Osip Petrov served here; this is where such great singers as Fyodor Chaliapin, Ivan Yershov, Medea and Nikolai Figner and Sofia Preobrazhenskaya honed their skills and rose to glory. Ballet dancers reigned supreme on this stage, among them Mathilde Kschessinska, Anna Pavlova, Vaslav Nijinsky, Galina Ulanova, Rudolf Nureyev and Mikhail Baryshnikov. This is where George Balanchine set out on the road to art. This theatre has witnessed the dawn of the talents of such brilliant theatre decorators as Konstantin Korovin, Alexander Golovin, Alexandre Benois, Simon Virsaladze and Fyodor Fyodorovsky among countless others.

The Mariinsky Theatre can trace its history as far back as 1783, when a Decree on the establishment of a theatre committee “for performances and music” was published on 12 July and the Bolshoi Stone Theatre was opened on Carousel Square amid great pomp on 5 October. The theatre gave the square its new name – even today it is known as Theatre Square.

Built according to plans by Antonio Rinaldi, the Bolshoi Theatre staggered the public with the sheer scale of its dimensions, its majestic architecture and its stage, equipped with the most up-to-date theatre equipment and machinery. The Russian Opera Company performed here in turn with the Italian and French Companies, and there were also plays and concerts of vocal and instrumental music.

St Petersburg was expanding and its image changed constantly. In 1802-1803 Thomas de Thomon – a brilliant architect and draughtsman – undertook the capital reconstruction of the interior layout and decor of the theatre, noticeably altering its external appearance and proportions. The new, grand and majestic Bolshoi Theatre became one of the architectural attractions of the capital city on the River Neva along with the Admiralty, the Stock Exchange and Kazan Cathedral. But on the night of 1 January 1811 there was a tremendous fire at the Bolshoi Theatre. In two days, the rich interior was lost and the façade was seriously damaged by the fire. Thomas de Thomon, who worked on the reconstruction plans of his darling project, did not live to see it come to fruition. On 3 February 1818 the restored Bolshoi Theatre opened once again with the prologue Apollo and Pallas in the North and Charles Didelot’s ballet Flore et Zéphire to music by the composer Caterino Cavos.

We are coming to the “golden age” of the Bolshoi Theatre. The repertoire of the “post-fire” era included Mozart’s Die Zauberflöte, Die Entführung aus dem Serail and La clemenza di Tito. Russian audiences were captivated by Rossini’s La Cenerentola, Semiramida, La gazza ladra and Il barbiere di Siviglia. In May 1824 came the premiere of Weber’s Der Freischütz – a work that exerted a great influence on the birth of Russian romantic opera.

In 1836, to improve the acoustics the architect Alberto Cavos – son of the composer and conductor – replaced the cupola ceiling of the auditorium with a flat one, above which he housed an artistic workshop and a hall for decorating the sets. Alberto Cavos removed the columns from the auditorium as they interfered with the view and distorted the acoustics; he also gave the auditorium its traditional horse-shoe shape and increased its length and height to seat up to two thousand people.

On 27 November 1836, with the first performance of Glinka’s opera A Life for the Tsar the reconstructed theatre opened once again. Perhaps by chance and perhaps by design, the premiere of Ruslan and Lyudmila – Glinka’s second opera – was held there exactly six years later, on 27 November 1842. These two dates would be enough to ensure that St Petersburg’s Bolshoi Theatre had earned its place forever in the history of Russian culture. But of course there were also performances of masterpieces of European music – operas by Mozart, Rossini, Bellini, Donizetti, Verdi, Meyerbeer, Gounod, Auber and Thomas…

In time, performances by the Russian Opera Company were transferred to the Alexandrinsky Theatre and the so-called Circus Theatre, which was located opposite the Bolshoi (where the Ballet Company and the Italian Opera Company continued to perform).

When, in 1859, the Circus Theatre was destroyed by fire, a new theatre was built on the same site, once again by Alberto Cavos. It was named the Mariinsky in honour of Empress Maria Alexandrovna, wife of Alexander II. The first theatre season in the new building opened on 2 October 1860 with Glinka’s A Life for the Tsar under the baton of the Russian Opera Company’s conductor Konstantin Lyadov, father of the renowned composer Anatoly Lyadov.

The Mariinsky Theatre secured and developed the great traditions of Russia’s first musical theatre. Marius Petipa, who became Director of the Ballet Company in 1869, continued the traditions of his predecessors – Jules Perrot and Arthur Saint-Léon. Petipa jealously preserved classical works such as Giselle, La Esmeralda and Le Corsaire, subjecting them only to careful revisions. His production of La Bayadère brought scope and range of choreographic composition to the ballet stage for the first time, where “dance became assimilated to music.”

Petipa’s lucky meeting with Tchaikovsky, who stated that “ballet is also a symphony”, resulted in the creation of The Sleeping Beauty – a veritable poem in music and choreography. Petipa and Lev Ivanov’s collaboration produced the choreography for The Nutcracker. After Tchaikovsky’s death, Swan Lake took on a second life at the Mariinsky Theatre – and again with choreography by both Petipa and Ivanov.

The Mariinsky Theatre has undergone several reconstructions. In 1885, when most productions had been transferred to the Mariinsky Theatre prior to the close of the Bolshoi, the principal architect of the Imperial Theatres Viktor Schröter added a three-storey wing to the left of the building for theatre workshops, rehearsal rooms, an electricity substation and boiler room. In 1894 under Schröter’s supervision, the wooden rafters were replaced with steel and concrete, the side wings extended and the audience foyers enlarged. The main façade, too, was subject to reconstruction, taking on monumental forms.

A government decree of 9 November 1917 made the Mariinsky Theatre the property of the State and it was transferred to the People’s Enlightenment Commissariat. In 1920 it began to be called the State Academic Theatre of Opera and Ballet , and in 1935 it was named after Sergei Mironovich Kirov.

The last pre-WWII opera premiere at the Kirov Theatre was Wagner’s Lohengrin, the second performance of which ended late in the evening on 21 June 1941, though the performances announced for 24 and 27 June were replaced by Ivan Susanin. During World War II the theatre was evacuated to Perm.

An important stage in the theatre’s history came in the 1980s with productions of Tchaikovsky’s operas Eugene Onegin and The Queen of Spades, staged by Yuri Temirkanov, the theatre’s Director from 1976. These productions, still in the theatre’s repertoire today, saw the emergence of a new generation of performers.

In 1988 Valery Gergiev was appointed Principal Conductor of the theatre. On 16 January 1992 the theatre’s historic name was restored and it became the Mariinsky Theatre once again.